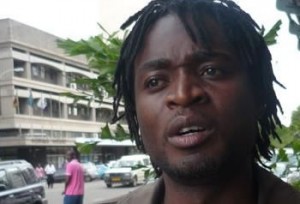 This presentation uses the concept of citizenship to understand the objectives of self-organisation among civic society players and grass roots movements.

“Racism in China: With friends like these does Africa…

Blessing Vava: Tuku the versatile, all weather and all style…

It is based on experiences and research conducted by the National Constitutional Assembly in Zimbabwe and addresses issues relating to the governance system, as well as the individual and collective empowerment of communities.

In this presentation I sustain and conclude that, not only do such groups have a role to play in ensuring that individual rights and opinions are respected and embraced, but also enable people to play a role in enhancing meaningful citizen participation and horizontal accountability by political leadership.

Central to this paper is the idea that social movements and civics should strive to develop citizens’ ability to actively and meaningful participate in democratic processes, and that the state must ensure qualitative dialogue with citizens on national developmental programmes.

Zimbabwe is currently governed by a power sharing deal between the country’s 3 major political formations owing to a disputed and inconclusive election of 29 March 2008. The current Government of National Unity is premised on the idea of reform for democracy and respect of citizen rights and choices.

It is an outcome of over a decade of people’s struggles for a more open society and democratic dialogue in national issues.

However, in this presentation I put it to you that the current political dispensation has seen a perpetuation of dictatorial norms and practises with silenced citizen voices which in my view is a classic case of citizen demobilisation and engraved apathy.

I look at the different sectors of governance and processes that characterise Zimbabwean Society:

There is inseparability of state and the ruling party in which national policy and decisions are decided by the political party rendering the parliamentary process irrelevant e.g.

o Decision on who is buried at the national shrine

o Appointment of public officials-the prerogative of the president

State of the Media

• One-sided and polarised, it compromises citizens’ access to unbiased information. The state media has become biased towards ZANU PF whereas the privately owned (media) is somehow biased towards the opposition.

• There have been initiatives to provide alternative voices in the broadcasting field by pirate stations like Studio 7, SW Radio Africa which have become popular amongst citizens. However the government jammed the frequencies and its nolonger possible to listen to the stations on normal radios.

This prompted several NGOs in Zimbabwe to distribute some small solar radios that have better frequency, but the government has now declared them illegal and several NGOs and homes were raided. Police spokeswoman Charity (Charamba) has said as elections approach it is not just radios that are the focus of police investigations, but other equipment distributed by NGOs like mobile phones.

“On these cell phones you can even put memory sticks to download information – to download pictures – and some of the gadgets, even like ball points [pens], which are being used to record people,” the police spokeswoman said.

Militarisation of the State- state security institutions, the police, army and intelligence services have been at the fore of suppressing citizen’s participation in governance issues. Service Chiefs have been declaring that they will not salute a President with no war credentials, a clear indication that they will not respect the will of the people if such a presidential candidate wins an election.

In Zimbabwe there has been a trend of retired military personnel now serving in most state institutions, ministries etc. State security organs have instilled too much fear amongst the citizens, the confiscation of radios distributed by NGOs is a classic example, and it’s now a criminal offence to own such a radio with short wave frequency.

The Government of National Unity (GNU)

After the disputed March poll, an unelected and undemocratic government was installed after the SADC initiated negotiations between the political parties. This government was not elected by the people of Zimbabwe and it ended up having individuals who lost elections running the affairs of the country.

Zimbabweans were not given a chance to elect a government of their choice. The political environment still does not allow for a free and fair election as violence and intimidation always characterise the electoral period in Zimbabwe.

A product of the Global Political Agreement signed by the parties in September 2008.

The agreement initiated Zimbabwe’s constitution making process, and this is articulated by Article VI which relegated the citizens in the making of the country’s supreme law. (NCA challenged Article 6)

Some of the arguments we had:-

The process was driven by politicians, who disguised an outreach phase but ended up negotiating their positions.

• The state media and some private media houses shut space for the NCA and other organisations and individuals which are opposing the draft. This is despite the clear violation of the SADC Principles and Guidelines Governing Democratic Elections which state access to equal media access as a key yardstick to free and fair electoral processes.

• COPAC played the referee and player role at the same time. After writing the draft, logic was that they should not have participated in the awareness campaigns which, instead of educating people about what is in the draft they ended up picking some supposed-good sections to entice the public to vote for the draft: a clear case of canvassing for votes.

• Three quarters of the voting population have not received the draft, COPAC only availed 90 000 with a paltry 20 000 being in vernacular. The courts reluctantly attend to the NCA urgent application court case seeking an extension of date to allow Zimbabweans to be given enough the copies and enough the time to decide on the draft.

• The state has unleashed the police to harass and intimidate civil society organisations confiscating radios which they claim were weapons of espionage and a threat to national security.

• The barring of polling agents of groups campaigning for a no vote, opens the process to rigging and manipulation•

• The “Yes” campaign used hate speech. For example the Prime Minister described the No campaign as being made up of “nhinhi”[Sunningdale] and those intending to vote “No” as having mamhepo (evil spirits)[Bulawayo].

• The police disrupted many “NO” campaign meetings and the atmosphere was not conducive to public meetings by the “NO” campaign to the extent that many voters had no access to the “No” message.

• The Zimbabwe Electoral Commission was not independent. For example, it failed to play its role in terms of electoral law to monitor media coverage.

• The judiciary was not independent. The courts dismissed, on suspicious grounds, every application meant to make the referendum more democratic.

Also, I note a new political culture of political cultism and the hero-worshiping of political leaders, which is now characterising our politics. This culture has destroyed open dialogue straight to the electoral processes; citizens have allowed politicians to set the agenda for them. It’s now more of what is Mugabe saying or what is Tsvangirai saying not necessarily the issues.

It is this culture that has bred dictatorship, and the centralisation of decision making e.g. Mugabe in ZANU PF and Tsvangirai and his MDCT. Both political parties are now being identified more with these individuals than the party itself and its membership.

Volunteerism must be the key principle within our social movements, and the encouragement of active participation of citizens in governance issues. There is need for the introduction of self-financing programs to regain citizen agenda setting.

“Racism in China: With friends like these does Africa need enemies?”

Blessing Vava: Tuku the versatile, all weather and all style musician (Orbituary)