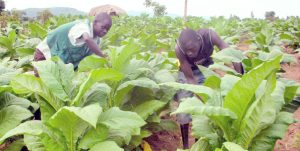 KAROI – Some Hurungwe tobacco farmers accuse traffic police officers of making unnecessary financial demands when they ferry their crop for sale in Harare.

Karoi farmer Barnabas Mupanedengu made the allegations in Karoi recently where rural farmers were lobbying the Government to award buying licenses to companies that operate in Karoi, situated about 204 kilometres north-west of Harare.

‘’As rural farmers we are against tobacco buying companies that are always in Harare as police are fleecing us making unnecessary demands from transporters and we are end up forking out too much to pay up to the police officers who demand bribes that never get into Government coffers. We want tobacco floors nearby as most farmers will not lose out financially’’ said Mupanedengu.

Hurungwe development leader Never Gasho said some senior Zanu PF officials are pushing to have Mashonaland Tobacco Company, MTC, license revoked so that no company will buy tobacco in Karoi.

‘’It is proving what type of leadership we have in Zanu PF as they are against development. We are calling on other buyers to be allocated licenses so that they compete and give farmers better prices. It is high time that producers dictate the price of our commodity’’ said Gasho.

‘’The police is against such practices and we call upon anyone to get a receipt when they pay. Motorists are also guilty if they pay and keep silent’’ said the police officer. He explained that they have since formed anti corruption units at district and provincial level.

‘’We have some officers facing disciplinary trials and will also face criminal charges and face expulsion if found guilty’ he added.

However, he had no statistics of officers fired for demanding bribes.

Police chief Augustine Chihuri is on record that police will not ‘’keep bad apples’’ although junior officers are among Zimbabweans importing cars from Japan. In December 2012, Chihuri said 123 police officers were arrested in anti graft operations within the force.

‘’Zimbabwe Republic Police utterly condemns any form of corruption and shall continue to invoke the wrath of the law to completely destroy this cancerous scourge’’ he said during a pass out parade of 210 officers in Harare.

He added that any police officer caught in corrupt activities would be severely punished and urged the public not to offer bribes to members of the force.