‘Sangoma used me to fertilise clients’ 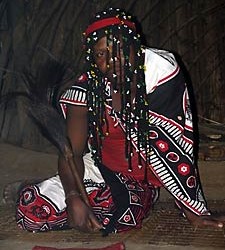 MUTARE – A Mutasa man is claiming that a local sangoma has been using his sperms for fertilisation purposes.

The sangoma who is also his ex-mother- in- law, has been harvesting his sperms for the past three years and using them to fertilise over 10 women who visited her seeking help in conceiving, but is now refusing to pay up.

Enock Mwashita of Muchena Village in Penhalonga made the startling revelations when he appeared before senior Mutare magistrate, Ms Sekai Chiwundura, who was in circuit in Mutasa, for allegedly disturbing his ex-wife and mother-in-law’s peace.

Chiwundura granted the two the protection orders they sought and ordered Mwashita to stop assaulting, insulting or threatening to kill his ex-wife, Phoebe Nyakunu and her mother, Judith Nyakunu.

Mwashita denied the charges levelled against him and claimed in an interview that his ex-wife and mother- in- law had cooked up the false accusations to cover up for the fact that Judith had not paid him for his sperms that she used on her clients.

“I met my ex-wife, Phoebe Nyakunu in 2007 and I married her the same year. We stayed together for a while, but we faced problems as my wife was always sick. We went to her mother’s place who is a registered traditional healer and she got better.

“Sometime in 2010, my mother- in- law advised me that we should stay with her for a while as there was a goblin that was sent to kill me at my home in Muchena and that is when my wife and I started staying with her.

“As we were staying with her, my mother- in- law told me that my first wife had “locked” me and I needed help and I agreed with her as I had been unable to perform in bed for some time. As she was “unlocking” me she massaged my private parts with oil and after that I was back to normal.

“She started repeating the procedure regularly and I thought she was still dealing with the problem of my impotency, but then I noticed that every time she did so, I would feel very weak afterwards.

“That is when it dawned on me that she was harvesting my sperms and she did so when a female client had come for help. We talked about it and she admitted she was using my sperms on women who came to her because they couldn’t have children. We then agreed that she would pay me $80 for every child conceived with my sperms.

“The way we operated is that when a client who was having trouble conceiving got to the house, Judith would take me to her “surgery” and massage my privates till I got an erection and ejaculated. She would then collect the sperms in a plastic bag and take them to the client waiting for her.

“She only took the sperm when a client had arrived. I can tell you today that I know of over 10 women, including three locally who were given my sperms and conceived the children they have today.

“Trouble between me and Judith started in December last year. A rich female client visited her and left $400 cash. I then asked Judith for my own share as she had not paid me for the children who had been conceived. We argued over it and she ended up reporting me to the police.

“Fearing that our deal would be exposed, she lied that I was harassing her and she wanted me to leave her home. That is how we ended up here today,” he said.

Mwashita claimed that Judith owed her over $800.

“I want her to give me my money which is now over $800 and I am not happy that she is staying with my children as she is now using my eldest child who is only four -years-old in her rituals. I am now also constantly sick and I am thinking of visiting prophets to seek help. I am not well. After using my sperms to get all those children for her clients, Judith really is ungrateful,” he said.

His ex- mother- in- law, who by her own admission is indeed a registered member of Zinatha rubbished Mwashita’s claims and said he was lying through his teeth.

“All he is saying are total lies. He is bitter because my daughter left him and he now comes to us demanding his lobola back. He assaults us and insults us and he has also promised to kill us. He is a monster and we had no option, but to seek the protection orders.

“As for using his sperms, that is total rubbish. He acts as if he is mad, but he is not, he is just a horrible liar. I never even stayed with him at my home as he is claiming,” said a distraught Judith who was accompanied by her daughter. Manica Post

From Miracle Money to Miracle Babies