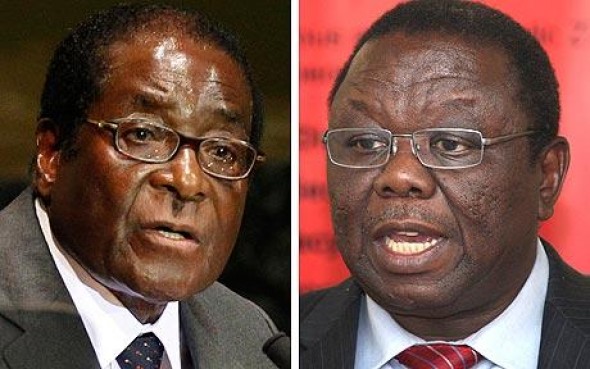 HARARE – Prime Minister Morgan Tsvangirai’s MDC and other parties are sweating over what they say is a covert military operation that could scupper prospects of a peaceful election.

They have now demanded that a coalition government organ whose operations are closely monitored by Sadc should investigate reports of armed forces embarking on an offensive “to sensitise the masses and general soldiers on the prospects of a Zanu PF loss”.

So serious are the fears that Tsvangirai’s MDC has raised an official complaint with the Joint Monitoring and Operation Committee (Jomic), an organ created under the power-sharing Global Political Agreement (GPA) to monitor Zimbabwe’s healing and peace-building process in the aftermath of the 2008 electoral bloodbath.

The MDC says the operation, which it claims is code named “nyika yaenda/nyika haiendi”, is meant to pre-empt an election defeat that seems to be coming Mugabe and Zanu PF’s way.

“I can confirm that at our last meeting before Christmas, Denga reported that senior military officials have been going around the province addressing villagers and warning them against an anti-Zanu PF vote,” said Kadenge.

“We (Jomic) are on leave now and when we resume work next Monday (today) that will be the top most item on our agenda,” Kadenge said.

Other organisations and political parties have also reported that such an operation was underway.

In a statement late last year, a group of Zimbabwe’s liberation war veterans going by the name Former Zipra High Command revealed an army general had been in Bulawayo updating the army in the region on the issue.

“As the country prepares for elections in 2013, the political atmosphere becomes emotionally charged.

Past plebiscites were marred by incidences of violence, conflict and hate speech.

“For the people of Zimbabwe to have faith in national processes the former Zipra High Command met on Tuesday November 27, to deliberate on matters of welfare, peace and security in the aftermath of the recent visit to Matabeleland and Bulawayo by General Constantine Guvheya Chiwenga, commander of the defence forces,” the statement said.

“I was told by our coordinators who attended one of the meetings that Douglas Nyikayaramba was doing the talking and told everyone who attended in no uncertain terms that the army would not fathom a Mugabe loss,” Chimbaira said.

The party’s policy director Qhubani Moyo said evidence of a sinister plot against the people’s will is awash as the country hurtles towards the much-anticipated elections later in the year.

“There is ample evidence of the military being used to intimidate the people or preparing to subvert the will of the people. Only yesterday, members of the military police quizzed the national chairperson over allegations of recruiting soldiers to the party.

“We call on Sadc to remain vigilant and demand the military be made aware that it has a duty to protect all Zimbabweans and without coercing citizens on whom they should vote for,” Moyo said.

The military general however, denied the charges.

“I am not aware of the meetings you are talking about. I was in Mashonaland Central and could not have been in Chikomba. Beware of getting yourself in trouble my friend. I will call you when I address in Chikomba,” Nyikayaramba said.

“They said voting for the MDC is tantamount to selling out and that the army would defend Mugabe.

I think such statements are treasonous especially coming at a time President Mugabe has been preaching peace. We now question Zanu PF’s sincerity about peaceful co-existence,” Denga said.

Contacted for comment, Mutekedza said nobody should question his authority.

“Iwe uri ani unobvunza mambo izvozvo. Baba havabvunzwe marara akadaro, (who are you to ask such a question to the King, you can’t ask your father such rubbish) so go to hell,” said Mutekedza before switching off his phone.

“That meeting was not sanctioned by the party so they were probably expressing their personal opinions. As a party, we condemn such utterances because the president has spoken against that more often than not. They cannot speak for the party because they are junior members. Choga represents the war veterans not Zanu PF,” he said.

Defence spokesperson, Overson Mugwisi while denying any knowledge of such meetings, requested the inquiry in writing.

“I have not heard that, there has not been any such meeting as far as I am concerned. May you please put your questions in writing so we can respond well,” said Mugwisi.

However, Mugwisi had not responded to two emails sent in the first and second week of December last year by the time of going to print yesterday.

Zimbabwe Peace Project director, Jestina Mukoko while not singling out the Chikomba incidents, said reports of escalating military presence across the country were rising.

“We have received numerous reports of military presence, drills and such other non-civilian activities that we think are only meant to cow the people.

“The military belongs to the barracks particularly at a time when we are not at war with anyone. There is no reason why Zimbabweans should be subjected to threatening military activities that have nothing to do with them,” Mukoko said.

Nyikayaramba has previously described Tsvangirai as a national security threat. Tsvangirai has laughed off the threats describing them as a pre-emptive coup and demanded security sector reforms before elections. Mugabe on his part has resisted such reforms arguing tempering with the army would compromise the country’s security.

Zanu PF’s secretary for administration, Didymus Mutasa has in the past said the military has every right to support Zanu PF because they fought under the party’s armed wing Zanla in the 70s independence war that ended white rule in 1980, while Justice Minister Patrick Chinamasa told a foreign television channel Tsvangirai will be looking for trouble from army commanders if he beats Mugabe. Daily News