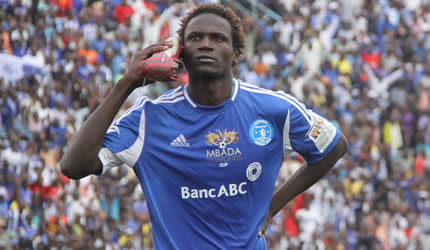 LANKY Dynamos forward Roderick Mutuma received a Christmas present with a difference this week when South African Premiership side Bloemfontein Celtic confirmed their interest in his services and officially invited him for trials next month.

Mutuma, the 2011 Premiership Golden Boot Award winner, had an indifferent start to the 2012 term, but later picked up his game to play a key role in DeMbare’s successful defence of their league and cup title defences.

He is now expected to be at Phunya Sele Sele, as Bloemfontein Celtic are affectionately known, on January 14 to start a two-week long trial during which a deal could be concluded if he fits the bill at the Free State-based outfit.

Pfumbidzai to tie the knot

The self-styled Prince grabbed the winner in Dynamos’ last league assignment of the season in the hard fought 1- 1 draw against Hardbody in Gweru on November 18 in which the Glamour Boys needed to avoid defeat to secure the championship.

A week later, he fired a brace in the Mbada Diamonds Cup final against Monomotapa at Rufaro to inspire Dynamos to a 2-0 victory.

He had earlier in the month also risen from the bench to grab a 75th minute winner when Dynamos beat Monoz 2-1 in a league encounter whose outcome was vital in deciding the destiny of the title race between DeMbare and bitter rivals Highlanders.

His late season resurgence however, did not go unnoticed with the Mbada Diamonds Cup final being beamed live beyond the country’s borders by SuperSport.

Mutuma had earlier attracted the interest of South African National First Division side with the Glamour Boys’ namesakes — Dynamos — indicating that they had been monitoring the former Sporting Manhenga’s striker’s progress since 2011.

Dynamos general manager July Malabela told supersport.com that they had been on the lookout for a striker of Mutuma’s calibre after they had failed to land Warriors forward Cuthbert Malajila.

“We have wanted Roderick since last year. We wanted Cuthbert Malajila, but Maritzburg beat us to him and at that time Mutuma was on trials at Ajax who had appeared keen on signing him right away.

“Now we need a striker and we will be fighting to get him. We will be working to get him anytime now as the league in Zimbabwe is finished now. We need him,’’ Malabela said then.

But Mutuma’s handlers were not too keen on a Division One and sought to be patient until an opening to a top-flight side had emerged. Now their patience seems to have paid off as Telkom knock-out winners Bloemfontein Celtic have invited him for trials on January 14.

Sources close to the move said yesterday that Bloemfontein — who had earlier been linked with another Dynamos striker Simba Sithole last month — are keen on securing a “gunslinger’’ during the transfer window which opens on January 1.

“Celtic have been looking for a striker who can settle into their side as quickly as possible and they have decided to give Mutuma a trial, they are on a short break for the festive holidays but they will resume training on January 14 and they have officially invited him to be part of their squad training starting on that day.

“The Transfer window would have opened on January 1 by the time Mutuma arrives at Celtic and it is up to him to rove his mettle because if he impresses, they want to tie up a deal with Dynamos and the player.

“They have monitored him and so far they believe he could be the kind of player to fit the bill as they really want to strengthen their attack for the second half of the season because they are still keen on mounting a strong challenge for the league title,’’ the sources said.

Despite winning the Telkom Cup, Celtic are currently in seventh place with 21 points from 16 matches and are 14 points behind leaders Kaizer Chiefs.

Coach Clinton Larsen’s men have managed just 16 goals from as many league matches at an average of a goal per game and Phunya Sele Sele know that such a scoring rate will not be good enough to win them the title, especially in view of the fact that they have also conceded 18 goals in the same number of games.

Mutuma could be one of three players who helped Dynamos do the double who could be leaving by the time the Harare giants get their 2013 campaign underway with a Champions League preliminary round assignment against Lesotho Correctional Services in February.

This is because rookie goalkeeper George Chigova is also set for an attachment at youthful Ajax Cape Town amid revelations that the Urban Warriors also want to have a closer look at the former Gunners man.

Chigova did not disappoint after being thrown into the deep end following veteran Washington Arubi’s departure for Pretoria University in mid season with the former Under-20 goalkeeper quickly establishing himself as Callisto Pasuwa’s first choice ahead of the more seasoned Phillip Nhete.

“Chigova has got the height, the built and the reflexes and with better polishing he could rise to be among the top goalkeepers for the country and Ajax would want to have a closer look at him,’’ the sources said.

Dynamos have already resigned to losing Soccer Star of the Year Denver Mukamba and did not include the Warriors midfielder on their Champions League squad. Mukamba is targeting a move to Bidvest Wits who have reportedly renewed their interest in him after dithering on signing him on in June.

Wits are also understood to be looking for a defender during the January transfer window period following their decision to offload former Bafana Bafana skipper and centre back Mbulelo Mabizela.

Goalkeeper Artwell Mukandi, whose contract with Monoz has expired, has also been registered with DeMbare for the Champions League as is former Lancashire Steel and Mwana Africa midfielder Stephen Alimenda.

Monoz, runners-up in the Mbada Diamonds Cup also look certain to lose their star midfielder Ronald Chitiyo who is set for trials at Ajax Cape Town next month. Chitiyo, a second runner-up to Mukamba in the Soccer Star of the Year awards, could have gone to Cape Town earlier this month, but he picked a knock during the Mbada Diamonds final. Herald

Pfumbidzai to tie the knot