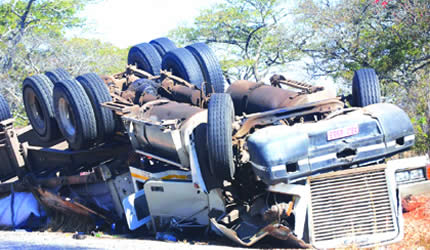 AT least 31 more people were killed in road traffic accidents in various parts of the country between Sunday evening and yesterday afternoon, with 18 of them perishing in one accident in Manicaland.

This brings to 101, the number of people who have died so far compared to 39 who died between December 15 and December 24 last year.

The 18 people in Manicaland were killed on Sunday evening, while 46 others were injured when a haulage truck veered off the road and plunged into a gorge at the 18-kilometre peg along the Selborne-Hauna Road.

The driver of the haulage truck, Beven Nyerenyere of 222 Kuwadzana 1, Harare, had 63 passengers on board, while travelling from Harare to Hauna when he lost control of the vehicle around 6:30pm.

Seventeen people died on the spot while the other victim was pronounced dead on arrival at Mutare General Hospital where some of the injured were admitted.

“Commuters need to be patient and stop boarding private vehicles. They should wait for public transport since they are the ones which were designed to carry people in large numbers. To the drivers, we strongly warn them not to speed, but must exercise extreme caution on the roads.”

At least 658 road traffic accidents have been recorded since the festive season started compared to 652 during the same period last year. Supt Matake said 628 vehicles had been impounded so far while 9 167 tickets have been issued to traffic offenders.

On Sunday evening, Harare’s deaths rose from six to eight, Bulawayo had two more bringing the number to 84. Midlands recorded 61 more accidents with the number increasing to 73, while Matabeleland North had one more from 16 reported on Sunday.

Matabeleland South’s death toll increased from 25 to 30, Masvingo had eight more deaths and Manicaland’s toll surged from 53 to 63. In Mashonaland Central, six more people were killed; bringing the death toll to 17, Mashonaland East and Mashonaland West had four more deaths.

This comes as the situation at Beitbridge Border Post improved yesterday with many of those coming from South Africa having crossed between Thursday and Sunday. The situation was unbearable on Sunday, with some travellers putting up at the border post as they failed to be cleared on time.

On the South African side, the queue for vehicles intending to cross into Zimbabwe stretched for several kilometres, taking many hours for one to reach the border post. The chaotic situation resulted in a 34-year-old Zimbabwean collapsing and dying while waiting to be cleared at the South African border.

The man is reported have been chronically-ill and was on his way from a medical check up in that country. Some motorists with foreign-registered vehicles were still stuck at the border by yesterday afternoon where they have to queue for long hours to pay various levies.

At least 25 396 people crossed into Zimbabwe on Thursday, 25 240 on Friday and 37 055 on Saturday. In Harare, the Christmas mood had gripped the city yesterday as evidenced by revellers who thronged various venues to enjoy themselves.

Popular places like kwaMereki, Mega2 and kwaZindoga were already teeming with revellers by 12pm as people took advantage of the day being declared a public holiday. A food vendor at Mereki who identified herself as Mai Fungai said this year has been different in that people flocked to the place earlier.

“Normally, people flock here for a collective count down for the New Year, but this has not been the case this year as you can see there are lots of people and cars here,” she said.

Long distance bus terminuses that were congested in the last two days were clear yesterday, indicting those who intended to travel to their rural homes had done so. But the fares being charged by the bus operators were still high.

Mrs Rudo Kanyemba, who was travelling to Murehwa, said she was made to pay US$10 for a journey that normally costs US$4. A Mupfumi Bus Services driver who only identified himself as Mike said business was low as most people had travelled by Sunday.

Beware of fraudsters this festive season