Zambian forwards give up DeMbare contracts

ZAMBIAN forwards Derrick Kabwe and Arthur Kaseloki have voluntarily withdrawn from their contracts with Premiership kings Dynamos, citing their failure to withstand the heat at the popular Harare soccer giants. 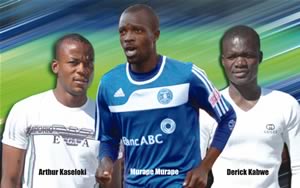 Kabwe and Kaseloki arrived at Dynamos, albeit in controversial circumstances following the manner in which they were recruited, but expectations remained high that the former ZESCO United pair would deliver. But it flopped in its debut season that was not helped too by a spate of injuries and illness.

More worryingly for Dynamos and coach Callisto Pasuwa was that both Kabwe and Kaseloki did not deliver in DeMbare’s failed Champions League and later Confederation Cup campaigns where the Glamour Boys had been hoping to cash in on the Zambians’ international experience in particular.

But by the time Dynamos sealed a rare domestic back-to-back league and cup double with a fine 2-0 win over Monomotapa in the Mbada Diamonds Cup final, it was Kaseloki with at least eight appearances who had featured more often of the pair.

It was probably on reflection of their poor contribution to the Dynamos cause that Kabwe and Kaseloki wrote to the club’s management and later approached Pasuwa to concede that they had found the going tough and wanted out.

Pasuwa confirmed the development yesterday and said Kabwe and Kaseloki were now just finalising the paperwork and payment of their dues from DeMbare before they pack their bags to return to Lusaka.

It also emerged that their club ZESCO United had earlier threatened to revoke the agreement they had entered into with Dynamos after the Harare giants failed to honour an outstanding balance of US$10 000 for the players’ services.

ZESCO are understood to have charged US$40 000 for Kabwe and Kaseloki’s services.

Pasuwa declined to discuss administrative aspects of the Zambians’ deal, but revealed that Kabwe and Kaseloki had approached him and offered to withdraw from Dynamos after conceding that the “club had proved too big for their shoes’’.

“Yes it is true that Derrick and Arthur are leaving Dynamos. It is unfortunate that they were affected by injuries and illness and they did not manage to play as many games each as we would have wanted and which they would also have wanted.

“I could see that they were disappointed that things did not turn up to be what they would have wanted, but when they came to me they thanked me and said coach we are grateful that you were patient with us and you tried your best.

“They also said coach we are grateful that you gave us a chance to show our skills even though we know there was a lot of politics and pressure on your part, but you did not allow that to affect your support for us we think Dynamos is a very big club and we couldn’t meet its demands,’’ Pasuwa said.

Pasuwa said Kabwe and Kaseloki’s case highlighted the need for Dynamos and other local clubs to be more prudent when bringing in foreign players.

“Any club would want foreign players, but it is important that those players would have to be a cut above local material. You really have to feel it when you play against them or notice it if you are watching them playing and there are a number of examples of very talented foreign players who graced our league.

“If you recall that when Sandras Kumwenda was at Dynamos you could see there was quality in him. It was the same story with the late Derby Mankinka at Darryn T and the late Webster Chikabala at Mhangura and many other top Zambian players who came here.

“CAPS United had such brilliant midfielders like Ian Bakala and Joseph Kamwendo or a tough defender of Laughter Chilembe’s calibre and their qualities told you that these were foreign players.

“So going forward clubs should have to be more careful about who they buy and those players must not be average otherwise it is better to work on improving the local players we have,’’ Pasuwa said.

The Dynamos coach, however, said he had not closed the door on buying more foreign players and revealed that he was cold soon possibly secure another Zambian.

“Fewdays Musonda (former CAPS United and Masvingo United coach) recently recommended a player from Zambia whom he would want us to assess so funds permitting we will try and bring in the player here and have a look at him,’’ said Pasuwa.

While the Zambian flops are shipping out, veteran midfielder Murape Murape is staying put and wants to play at least until 2014. The pencil forward also revealed his ambition to take up football administration when he finally calls time on a successful career spanning over 15 years.

The 32-year-old, who has of late become a fountain of influence in the Glamour Boys side because of his experience, believes his future lies in the management side of the game.

And as he nears the twilight of his career, the diminutive midfielder hopes to play for at least two more seasons until the end of his contact with the Harare giants lapses in 2014.

Murape said he is enjoying the game in his “extra time” after he rescinded a premature decision to hang up his boots last season.

“The other time I had indicated that I wanted to retire, but I came back. My contract runs until 2014 and if I am still of good health and if God gives me more life that could be my last year.

“But I have to plan for life after football. I may go into administration because we have seen that there are people who come into this area with little appreciation of the game itself and such people contribute very little and they kill the industry.

“Administrators come and go, but there is no improvement to the game. This is our industry. It’s time we should see the football the way it is done in Europe. Imagine, you can play football in Zimbabwe for a long time, but you will not have anything to show for it after all the years of toiling.

“That is exactly what we are asking from sponsors to look into the industry because football is not developing,” he said.

Murape has won four championship medals with the Glamour Boys and is hungry for more success with the Harare giants. The just ended season has been very satisfying for him as the club successfully defended a remarkable league and cup double.

As they prepare for another hunting mission in Africa, Murape believes he still has the energy to contribute to the team’s quest and has one wish before hanging his boots — winning the Champions League.

And with two years tentatively remaining on his calendar, it has to be next year or 2014 and he urges his teammates to work harder to avoid the disaster that befell them in this year’s campaign when they failed at the second round stage.

“We worked hard this year to win the league and cup double. We had our share of problems as a club, but I am happy we managed to go all the way and record successes on the domestic front. I am one of the privileged players at the club to have won four titles with the team. But now I would want to go all the way and win the Champions League. That is my wish,” said Murape.

Besides outlining the plans on his future, Murape also revealed his compassionate side after the team’s tour of the hospital wards where they met patients and distributed “get-well soon” cards to the patients. The Herald

Through the Wire: The Bishop from Hell