A summary of events specifically in Nyamandlovu/Tsholotsho), as revealed by The Chronicle, Bulawayo’s daily newspaper, is given here. This tends to highlight dissident activity, and is a useful counterpoint to data from other sources. 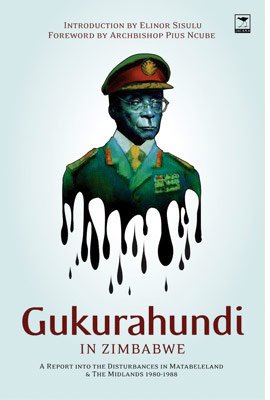 The second outburst of fighting between ZIPRA and ZANLA forces spills over into Nyamandlovu, where army units loyal to the Government intercept columns of ZIPRA troops heading for Bulawayo from Gwayi in the north.

Two people are shot dead near Khami, and a third is injured, by “armed men”.

A Nyamandlovu farmer is ambushed by dissidents and sustains a gun-shot wound. Two days later a lorry driver is shot and killed near Godzo, in Tsholotsho. In the same month, a farmer’s wife drives through a dissident ambush but is not injured.

Dissidents rob a bus, a beer garden and 4 stores in Nyamandlovu. They also burn out 2 resettled villages in Nyamandlovu, leaving 75 families homeless. “One woman” is also killed.

The manager of Grant’s Sawmills, Nyamandlovu, is shot at by dissidents – no injury.

A police auxiliary constable is shot and injured at Hillmiles store.

A local farmer drives through an ambush at the 76 km peg on the Victoria Falls road (in Nyamandlovu), does not stop and sustains no injury – perpetrators, dissidents.

Six foreign tourists stop when ambushed at the 76 km peg on the Bulawayo Victoria Falls road, in Nyamandlovu, and are abducted.

Mine-workers are shot dead 20 km north of Bulawayo. 7 off-duty soldiers are lined up against a wall in Ngoma beerhall, Nyamandlovu, and are bayonetted: 5 die and 8 are wounded – by dissidents. Three buses are robbed, and so are “stores”, all in Nyamandlovu.

2 Swiss tourists witness a shoot out between security forces and dissidents, 90 km north of Bulawayo.

A curfew is imposed on Northern Matabeleland, banning buses and private vehicles in the communal areas, and banning reporters.

Dissidents rob a bus in Nyamandlovu.

There are several incidents involving dissidents. In Tsholotsho, Z$2 million of Government equipment is destroyed. In Nyamandlovu, 6 people including 2 children are shot dead in a farm ambush, on 31 December. One unnamed villager and 2 named villagers are also reported murdered by dissidents in Nyamandlovu.

The Government agrees to allow farmers to re-arm, to protect themselves against dissidents. They had all surrendered their weapons at Independence.

Stringent curfew regulations are introduced: at the same time, 5 Brigade is deployed into the region, and begins to work its way northwards, through Tsholotsho, into Lupane and Nkayi.

An elderly commercial farming couple and their 2 young grand-daughters are brutally beaten and then shot by dissidents on their farm in Nyamandlovu.

The curfew is lifted. There are repeated ZANU-PF rallies in Matabeleland in February, March and April at which people are warned not to support PF ZAPU, and dissidents are paraded, declaring their PF-ZAPU allegiance. More than 20 000 PF-ZAPU supporters surrender their cards and join ZANU-PF.

A forestry commission ranger is murdered and another abducted by dissidents in Chesa Forest Area, Nyamandlovu.

Youths in Nyamandlovu are reported abducted by dissidents, and are rescued.

Men are reported murdered by dissidents in Nyamandlovu.

JUN 20 dissidents kill one person and beat others, in Tsholotsho

An unnamed boy is reported as being killed by dissidents, another as kidnapped, while unnamed, unnumbered “workers” are beaten and property burnt, in Nyamandlovu.

Inquest into the murder in Feb 1983 of 2 men and 2 women, whose car was stopped on the Bulawayo – Victoria Falls road by four 5 Brigade soldiers. The inquest finds them reponsible for “exceedingly cruel” murder. (LCFHR p 40)

One woman is reported murdered and 9 injured, by dissidents

Dissidents burn a bus in Nyamandlovu.

Dissidents burn out a school complex, and kill one person, in Nyamandlovu.

A commercial farming couple and their foreman are shot and killed by dissidents. Dissidents also kill 3 villagers and 4 Zanu-PF party officials in Tsholotsho.

1986 There are no press reported incidents involving dissidents/armed men/ bandits specifically designated as occurring anywhere in Matabeleland North, including Nyamandlovu, in 1986.

2 German tourists are shot and killed in Nyamandlovu, by dissidents

A Nyamandlovu farmer on his way to a cattle sale is shot dead with his militia man, by dissidents.

Amnesty is announced for dissidents, and then for security forces. A total of 122 dissidents surrender.

Racial Discrimination in Zimbabwe: A systematic program of abuse (Part 1)