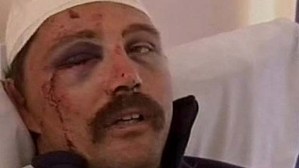 Racial Discrimination in Zimbabwe: A systematic program of abuse (Part 1)

“Our party must continue to strike fear in the heart of the white man, they must tremble…. The white man is not indigenous to Africa. Africa is for Africans….The white man is part of “an evil alliance.”

President Mugabe, speaking at the ZANU PF Congress in December 2000

“The only language that the mabhunu (white man) will understand is the language of the gun. The more you kill, the nearer you get to your objective.”

White farmers are “hard‐hearted, you would think they were Jews”.

“Whites are not human beings”

“Yes there are hardships but if they (white industrialists) leave, it’s a good thing, because we will take over the companies. To those of you who support whites, we say down with you.”

Robert Mugabe rose to prominence in 1976 during the liberation war when Rhodesia’s neighbours, Zambia, Mozambique, Angola and Botswana, known as the front‐line states, agitated for unity between the ZANLA and ZIPRA forces, urging that they be united as the Zimbabwe People’s Army (ZIPA).

This took place under the leadership of Rex Nhongo (the late General Solomon Mujuru). When Mozambican President Samora Machel insisted on the appointment of a ZANU leader in the number two position, Robert Mugabe was finally agreed upon, despite Machel’s reservations and the fact that Mugabe was not well known at the time.

Machel’s reservations proved to be valid. Mugabe wasted little time in dissolving ZIPA and abolishing all the joint organisations between the liberation movements.

“Gradually,” explained Wilfred Mhanda, a senior ZANLA commander, in an interview in 2001, “we realised that we had made a terrible mistake. I now greatly regret it, as do the other members of the Zimbabwe Liberators’ Platform. He was arrogant, paranoid, secretive and only interested in power.

And he didn’t want unity at all since he was scared that (Joshua) Nkomo, as the senior African nationalist, would take over a united movement.”

In his book, Dzino – Memories of a Freedom Fighter, Mhanda noted that soon after Mugabe’s appointment, they got some revealing glimpses of his personality. “Cunning and clever”… he was stoking the fires behind the scenes and using (Edgar) Tekere as a pawn to test the waters.”

In an interview in August 2011 with Short Wave Radio Africa, Mhanda described Mugabe as “…intolerant of divergent views, he is single‐minded, he is preoccupied about his position of power. He’s more interested in securing his power than anything else, that for him is the raison d’être, it’s the over‐riding consideration…”

After the British‐mediated Geneva conference (October‐December 1976), Mugabe persuaded Machel – who had finally been reconciled to his being ZANU leader ‐ to arrest approximately 600 fighters and the 50 top commanders, whom he knew were critical of him, (including Mhanda).

He claimed this was necessary to head off military rebellion. They were incarcerated for six months in a filthy, lice‐infested jail and were effectively starved. Without blankets in winter, many fell ill with fevers – conditions which Mhanda described in an interview with South Africa’s Helen Suzman Foundation as being virtually identical to those on slave ships.

Afterwards they spent two years in a former Portuguese military camp before their release, which was part of the independence deal.

Calls for Negotiations to End the War

“By 1979, the guerrilla war had spread to every rural area of Rhodesia. Main roads and railways were under frequent attack…. As the war intensified, Britain launched one last initiative to find a solution, calling for negotiations at a conference to be held in London….

Once again Mugabe saw no need to attend. (But) yet again (he) faced the wrath of African presidents. Both President Samora Machel and President Kenneth Kaunda insisted that so damaging were Rhodesian raids on guerrilla bases and supply lines in Mozambique and Zambia that they could no longer afford to support the war effort.

Machel … was blunt: If Mugabe refused to go to London and explore negotiations, then he would close down the liberation war. Mugabe was furious (but) gave in and arrived in London in September 1979.”

“Although Mugabe balked at accepting the ceasefire arrangements of the Lancaster House Agreement, an envoy from Machel told him “Mozambique would make no more sacrifices for a war that could be won at the conference table.”

“Mugabe was resentful about the outcome of the conference. ‘As I signed this document, I was not a happy man at all. I felt we had been cheated to some extent, that we had agreed to a deal which would to some extent rob us of victory we hoped we would achieve in the field.”

“In Mozambique, shortly before Mugabe’s return to Salisbury, Machel had intervened to warn ZANU against fighting the election on a revolutionary platform. Machel himself was still struggling to overcome the massive disruption caused in Mozambique at independence in 1975 by the exodus of whites fleeing from the Marxist regime he had instituted.

Addressing members of ZANU’s central committee, Machel was blunt. ‘Don’t play make‐believe Marxist games when you get home,’ he said. ‘You will face ruin if you force the whites there into precipitate flight.’”

Consequently, Mugabe’s manifesto was stripped of all reference to Marxism and revolution: ‘ZANU wishes to give the fullest assurance to the white community, the Asian and coloured communities that a ZANU government can never in principle or in social or government practice, discriminate against them.

Racism, whether practised by whites or blacks, is anathema to the humanitarian philosophy of ZANU. It is as primitive a dogma as tribalism or regionalism. Zimbabwe cannot just be a country of blacks. It is and should remain our country, all of us together’.

March 4, 1980: “That evening, Mugabe appeared on television…. (and) called for stability, national unity and law and order; promised that pensions would be guaranteed; and pledged that private property would be protected.

‘There is no intention on our part to use our majority to victimise the minority. We will ensure there is a place for everyone in this country…. Let us deepen our sense of belonging and engender a common interest that knows no race, colour or creed.’”

In a conciliatory speech made on April 17, 1980 ‐ the eve of independence, President Mugabe said:

“Our new nation requires of every one of us to be a new man, with a new mind, a new heart and a new spirit. Our new mind must have a new vision and our new hearts a new love that spurns hate, and a new spirit that must unite and not divide.”

He went on to urge that all Zimbabweans embrace this new ethos towards a peaceful and successful nation, cemented in love and forgiveness. He held such forgiveness as a high priority, stating:

“If yesterday I fought as an enemy, today you have become a friend and ally with the same national interest, loyalty, rights and duties as myself. The wrongs of the past must now stand forgiven and forgotten.

“If ever we look to the past, let us do so for the lesson the past has taught us, namely that oppression and racism are inequities that must never again find scope in our political and social system. It could never be a correct justification that because whites oppressed us yesterday when they had power, the blacks must oppress them today because they have power.

“An evil remains an evil whether practiced by white against black or by black against white. Our majority rule could easily turn into inhuman rule if we oppressed, persecuted or harassed those who do not look or think like the majority of us….”

The Crime of Opposing Mugabe

“The callousness that Mugabe displayed against ZIPA for no other crime than speaking their minds resurfaced after independence during the Gukurahundi period (1982‐7) in his quest to destroy ZAPU, and more than two decades later when he faced a stiff challenge in the form of a new vibrant opposition party, the Movement for Democratic Change,” wrote Mhanda in his book.

“This lesson should not be lost on anyone. Robert Mugabe has always been intolerant of divergent views and will brook no opposition. He has always been single‐minded in his pursuit of power and will, in that regard, deal decisively with any obstacle, real or perceived.”