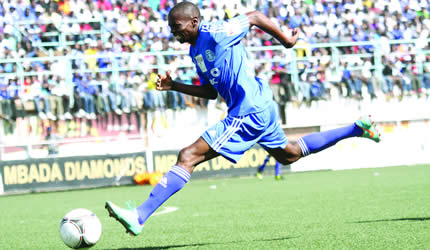 Monomotapa, who have been playing some jaw-dropping football this season, freezed at the last hurdle when it mattered most and simply gave in to a well-determined DeMbare.

While Mutuma made the difference with his well taken two second half goals, skipper Tawanda Muparati deserves plaudits for gallantly standing his ground against Monoz trouble brewer, Ronald Chitiyo whom he kept under lock and key.

So determined was Muparati all afternoon that he completely marked Chitiyo out of the game, trailing him even on some occasions DeMbare were in possession forcing coach Biggie Zuze to pool out his star player.

Artwell Mukandi, in goals for Monoz, was a very busy man all afternoon and had it not been for the former Pamushana High School pupil’s brilliance, Dynamos could have easily scored half a dozen goals.

As early as the seventh minute the defending champions had a chance to take the lead with Simba Sithole playing Denver Mukamba into space wide on the right. Mukamba in turn dribbled past Nelson Melson before crossing for Mutuma who was beaten to the ball by an alert Mukandi.

Meanwhile Monoz were not to be overrun as they fought back, knocking the ball around in the middle of the park, but with their talisman Chitiyo “banned” from the game by the combative Muparati, “Chinomakwa Nani” lacked the much-needed cutting edge literally making Chigova a mere spectator.

Biggie Zuze’s decision to employ a three-man frontline of Kuda Musharu, Osborn Mukuradare and Tawanda Nyamandwe short-staffed his charges in the engine room and DeMbare began to boss possession with Mukamba at his usual best.

Mukandi was again forced into action in the 19th minute pushing out Mukamba’s well taken first time effort off a Murape pass for a corner.

With three minutes before the breather ‘Chinomakwa Nani’, who were being forced into some serious marking duties, got a rare chance to try their luck at Chigova’s goal after winning a free-kick 25yards from glory, but Hillary Mugoniwa’s effort went just over the bar.

Referee Ruzive Ruzive awarded Monoz a corner kick after adjudging the airborne Chigova to have had the last touch before the ball went into touch, a decision which did not go down well with the blue flag-waving legion which began throwing missiles onto the pitch.

The brickbats only ceased after the sporting intervention of Dynamos players who pleaded with their fans to stop.

Ten minutes after the breather Mutuma got sight of goal after a long and speculative clearance by Partson Jaure fell kindly for him. The Prince, as Mutuma is fondly referred to, controlled well setting a one-on-one with Mukandi and rightly went for glory with a low shot but Mukandi pushed it wide for a corner kick with the partisan crowd up in anticipation.

Three minutes earlier Muparati had been booked by Ruzive and Zuze should have realized that Chitiyo was now going into challenges with better bargaining power as Muparati treaded carefully fearing an early shower.

Four minutes after the hour mark and with Chitiyo out of the picture, Dynamos took the lead with Mutuma beating the badly exposed Mukandi with a simple tap-in.

Warriors star Mukamba side-stepped Tendai Ngulube and Jimmy Tigere with a sublime piece of individual brilliance before setting up the fleet-footed Ocean Mushure who raced towards the goal line and caped it with a cross for “The Prince’’ whose response was coated with gold.

This time it was “The Prince’’ himself who initiated the move in the middle of the park with a chicky flick to Simba Sithole who then embarked on a brilliant run leaving Obey Mwerahari for dead then returned the favour to Mutuma who again had the easiest of tasks slotting past a hapless Mukandi. After the second goal it was time for Mukamba to wow the crowd as he exhibited some brilliant individual skills dribbling past Monoz barriers as if they did not exist.

After the match Kalisto Pasuwa, the DeMbare gaffer, was full of praise for his charges but was reluctant to claim glory after a heroic display that saw him historically defend both the league title and the premier knockout cup.

“Monoz are a good side that is capable of beating any team even by three goals on their day. But today we played very well and never allowed them to play their normal game. We made it very difficult for them by keeping possession,” said Pasuwa.

Asked if the triumph does not put him at par with the country’s leading football brains, Pasuwa smiled.

“I am still learning the ropes but if I continue winning you probably can start saying that (I am one of the best).”

His opposite number attributed stage fright as his side’s biggest undoing.

“Stage fright killed us. Most of my players are very young and playing in a major final was a first time experience for most of the guys,” moaned Zuze.