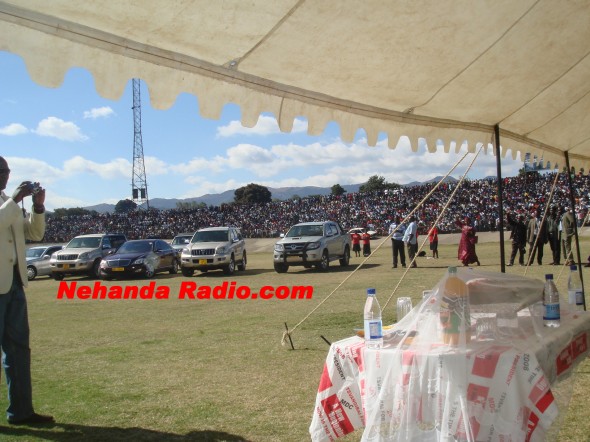 PRIME Minister Morgan Tsvangirai is stepping up his election campaigns, taking his canvass for votes ahead of next year’s polls to his rural Buhera village last weekend.

His arch-rival, President Robert Mugabe has also been doing the rounds, laying the ground for what promises to be a titanic election battle given the high stakes for both candidates.

If Tsvangirai loses, it is likely to mark the end of his struggle to capture to the presidency, while a defeat for Mugabe will sound the death knell for his rule and long political career.

MDC leader and Industry and Commerce minister, Welshman Ncube, has also been tirelessly campaigning in preparation for his maiden foray into the uncharted territory.

In a bid to re-invigorate his base, the MDC-T leader said victims of political violence have defined the path of the struggle and his supporters must now finish the job. “We suffered a lot, but the resilience of people, their commitment, and their courageousness has stood the test of time,” he said.

The fruits of Independence, Tsvangirai said, have not cascaded to the general population. “If you reflect back and ask yourself – has my life changed from 1980? The answer is a strong No,” he noted. Tsvangirai implored the party faithful to remain focused and fight as a united force.

“We might have our personal differences but when it comes to party business, we should all have unity of purpose. We should fight like a pack of lions. We have beaten them the last time and so what can stop us now from repeating history?” he said.

While Tsvangirai’s grassroots messages resonated with the bumper crowd, the affluence gap between the visibly well-off senior MDC-T officials and poor masses was glaring. On the side-lines of the gathering, some villagers noted the rapid transformation of the MDC-T leaders from their humble days in 2000 when they started off to now after amassing wealth.

The vast difference between the villagers, desperately eking out a hand-to-mouth existence and the lavish lifestyles of top MDC-T officials and ministers who rolled into Tsvangirai’s home area of Humanikwa village — about 200km away from their posh houses in Harare — in top-of-the-range vehicles and swanky attire, was all too visible.

The poverty-stricken rustic folk, some of whom travelled on foot for long distances to attend the rally for victims of political violence at the hands of Zanu PF, looked at the luxurious cars, ranging from the latest Mercedes Benz, Range Rovers and Land Rovers, to Land Cruisers and Prados with envy and resentment as proved by their furtive chats in hushed tones among each other.

Apart from Tsvangirai, other MDC-T heavyweights who attended include Thokozani Khupe, Lovemore Moyo, Nelson Chamisa, Theresa and Ian Makone, Murisi Zwizwai, and Giles Mutsekwa, among others.

MPs from Manicaland were not to be outdone as they arrived in Isuzu double-cabs and Madza BT50s — luxurious cars by village standards. Tsvangirai’s mother, Lydia, clad in a deep red designer suit and cream wedding hat, arrived in style in a black Isuzu accompanied by relatives, all looking rather affluent.

Villagers started arriving at the venue around 8am, two hours before the rally was scheduled to start. Tsvangirai arrived amid dramatic scenes with his wife Elizabeth Macheka in a convoy of four cars shortly after 11am.

As he disembarked from his silver Land Cruiser clad in an exquisite blue, white and red wide-striped casual shirt, dark blue trousers and a beige cap, jubilant villagers burst into scenes of joy as women ululated and men whistled amid a crescendo of shouts of Tsvangirai’s totem “Save, Save, Save. . .”.

The rally was a microcosm of the widening gap between the poor and the rich on a national scale.

This was made more conspicuous by the eye-catching Elizabeth who was exquisitely clad in purple head gear and bright blue, red, yellow and purple “African attire” with a turquoise blue lace over the upper top and arms.

For a moment, save for the sight of the gathered humble rural folk, looking at the MDC-T officials in expensive attire, matching hats and shoes and their luxury vehicles, the “ bling bling” made the memorial appear like a high-society carnival event.

However, the jubilant supporters sang, danced, whistled and ululated under the scorching heat of the sun which seemingly did little to sap their energies.

Although Tsvangirai and his colleagues later parcelled out small quantities of groceries which included cooking oil, sugar, soap and mealie-meal, his political show of benevolence could not to hide the reality that MDC-T officials were an island of prosperity in a sea of poverty –– something which diluted his somewhat mass-appealing delivery at the rally. Zimbabwe Independent

Will Kunonga be able to call on Mugabe?