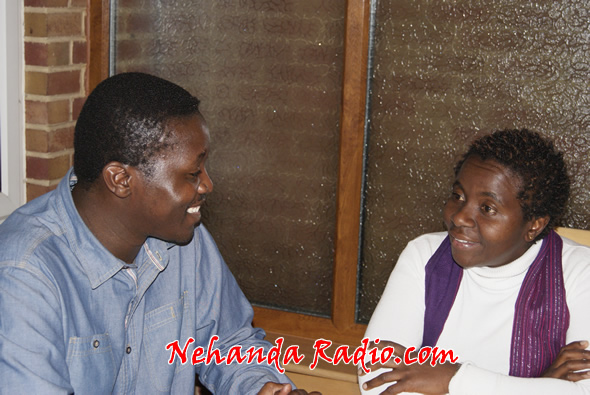 Lance Guma: Good evening Zimbabwe and thank you for joining me on Nehanda Radio. This week on The Big Interview I am joined by the spokesperson for the Constitutional Parliamentary Select Committee (Copac) Jessie Majome. She is also the Member of Parliament for Harare West constituency and also the Deputy Minister for Women’s Affairs.

Ms Majome, thank you for joining us.

Jessie Majome: You are welcome.

Guma: Okay, the constitution making process, the latest we are hearing is that the parties in the coalition government are going to be seeking the intervention of South African president Jacob Zuma to try and break the impasse caused mainly by Zanu PF seeking to make alterations to this draft.

As far as you are concerned where are we as Zimbabweans and where are you as Copac in this process?

Majome: I will start with Copac. Copac is now almost reaching the final kilometre peg as it were towards concluding its terms of reference. As you are aware we have a draft constitution that came about from the outreach process and finishing the draft itself was the third last stage in our terms of reference.

The next one which is the penultimate one, which is where we are, was convening a Second Stakeholders Conference, in order to table the draft, which we did as you are aware.

Guma: No changes were made at the Second Stakeholders Conference?

Majome: No changes were made at all…

Guma: At this conference the three parties can any one of them or were any of them able to make objections?

Majome: There conference was held in order for the draft to be tabled, because the very words….

Guma: Tabled to the stakeholders who were there?

Majome: Yes, that’s what the three Principals in their wisdom decided to do when they signed the Global Political Agreement, they said we are to table the draft and we did exactly that and the conference noted the draft and it made comments about it.

So this is what we did, we tabled it and what we must then now do in order to prepare for the last, the very last dot, the full stop in the terms of reference of the Select Committee is to prepare a report of the process itself.

So when we prepare that report, the very last thing that we will do, which is the very end of the road for the Select Committee in terms of Article 6 and in terms of the process itself, is to present the report to Parliament.

Guma: So depending on how the parties in Parliament vote, this could be blocked in parliament?

Majome: Actually a reading of Article 6 gives no room at all for Parliament to vote either this way or that way. It simply says that Parliament debates and in the normal course of events when Parliament is presented with a report of any of its committees, Parliament will debate.

It usually debates the work of the committees, so that’s its ventilated. It is not usually envisaged that Parliament can block because there is hardly ever any room, I don’t know, I am not aware of any process where a report has had to be voted upon because it is a report of a committee itself and Parliament then adopts it as a whole.

Guma: What about this talk that the Principals in the coalition government are going to be taking over this process. Clearly this seems to be the argument advanced by Zanu PF or so we are told, that the Principals will have a final say on this Copac draft.

Majome: I am clear and comfortable with referring to the very letter of the Global Political Agreement. It says in black and white exactly what must be done.

It says clearly, it has milestones that take you from point A to point B in a very clear manner and right now we are at a point were Article 6 says that after the Second Stakeholders conference, we the Select Committee of Parliament established in terms of the standing rules and orders of Parliament we prepare a report and present our report to Parliament.

So my understanding it looks like from a legal point of view it might be a relationship similar to that of agency in that the Select Committee of Parliament, is executing a mandate for the three Principals. They have already given that mandate to us and we are executing it.

Guma: As the MDC, is your leader, who is also the Prime Minister, Morgan Tsvangirai, is he also clear that the Principals will not have a final say. Is he taking the party position? It seems to be Mugabe who is saying the Principals have the final say, but is Mr Tsvangirai also saying the same?

When we sit on that committee we do not go on frolicks of our own. We do not subject ourselves to our own whims. We are chosen to represent our political parties. That’s why Article 6 clearly says that the Select Committee shall comprise of, shall be reflective of the diversity of Parliament in terms especially of the parties.

What it then means, because of that, is that each party, it’s a given that when you sit there, we are sitting there to fulfil more or less to fulfil the instructions of our principals, although of course….

Guma: Which is puzzling to a lot of people because if this process done by Copac was a product of all three parties why at the eleventh hour did we have Zanu PF saying they wanted to make amendments?

Majome: Look I’m sure Zanu PF has a democratic right to decide what it wants to decide but at the same time they have not only a moral but a legal obligation as well to adhere to the letter and spirit of the agreement that they signed.

So I have difficulty being able to explain exactly how they will do so but I am very clear in my mind and it’s clear for everyone and for all to see. Anyone who cares to read what the three principals agreed, it’s a very simple and straight forward process that says how this should be done and they committed themselves to this and they have been present throughout from the beginning of the process. Their representatives are there, their very senior representatives are there.

Guma: They were sniping at each other calling (Paul) Mangwana (Zanu PF Co-chair of Copac) a sell out and things like that, so clearly not a happy house there but from the way you are describing it there is clearly no need for (South African President) Jacob Zuma to intervene, the process is clear in the GPA.

Majome: According to my vantage point, I would agree because you know the Global Political Agreement is in black and white, it’s in bold and black and white. It’s so clear and the font is very large (…laughs) and it would be difficult to see what, it’s difficult to miss exactly what it says.

Sadly time and time again throughout this process, this process has been punctuated by these detours, attempted detours from the process. I remember at the very beginning when we started the process, our very first term of reference was that we convene a First All Stakeholders conference as a select committee so that we bring civil society on board because the Principals said they wanted, although they the Principals were the ones more or less giving agency to a Select Committee of Parliament, they were very clear that they wanted the process to be characterised by four things.

They chose very deliberate words, and they chose these terms very carefully and there are four terms. They said they wanted the process to be people driven, and they said they wanted it people owned and thirdly democratic and four inclusive and those words are very clear, they chose those words themselves. And they said that they want conditions created that are conducive for the people of Zimbabwe to make a constitution for themselves.

Which is then why I start to wonder, if the Principals, theoretically speaking, they said we are taking over, are those the conditions that are conducive for the people to make a constitution for themselves?

Part 2 of this transcript will be published on Monday……………

Zacc commissioner Jessie Majome staying away from MDC…. “I left…

Hopewell Chin’ono: We should separate state appointments from partisan politics:…