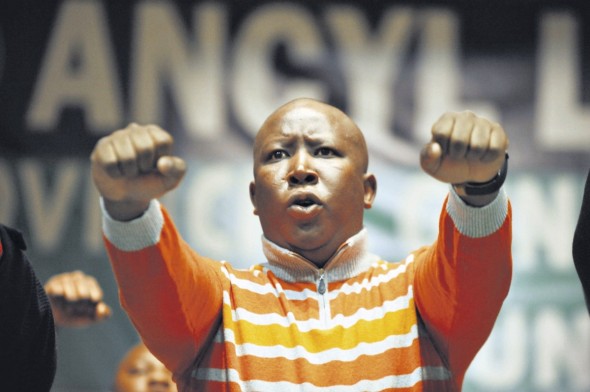 During a trip to Zimbabwe over the weekend, Malema’s bouncers manhandled Daily News journalists Tendai Kamhungira and Bethule Nkiwane in Harare after they sought to interview the controversial rabble rouser on Saturday.

Zimbabwe Union of Journalists (ZUJ) Secretary General Foster Dongozi has now demanded an apology from Malema for “the violent and disorderly conduct” of his aides.

“You are fighting to be Negros” – Malema…

“We do appreciate that this week it was reported that we, as Zimbabwe, are importing a lot of consumables from South Africa but I do not think Malema and his hangers on should add violence against journalists, intolerance and so on to what we should import from South Africa,” Dongozi said.

“As African journalists, we have been campaigning for the Safety and Protection of African journalists at the African Union Commission and sadly, Malema’s compatriot, the incoming AU chairperson, Nkosazana Dlamini- Zuma will have to deal with our complaint.”

Dongozi said “we cannot have our journalists being harassed as a result of violence imported from South Africa through Malema’s bodyguards. We demand that Malema should issue an unconditional apology for the trauma brought on the journalists and that they should return the memory card which was stolen by his aides from his camera.”

ZUJ says it is going to raise its concerns with the South African Embassy and the African Commission’s Special Rapporteur on Access to Information and Freedom of Expression, Pansy Tlakula (another South African) and Zimbabwean authorities.

“If Malema genuinely has an interest in the rights and welfare of workers, which he claims, he should apologize for the abuse that two Zimbabwean workers suffered at the hands of his hangers on,” ZUJ said.

“Recently, following massive engagement and lobbying, the United Nations Council on Human Rights adopted resolutions on the safety of journalists which have to be respected by State and non-State actors including violent mobs accompanying Malema,” the ZUJ statement added.

Peter Ndlovu should have played against Angola

“You are fighting to be Negros” – Malema slams South Africans…