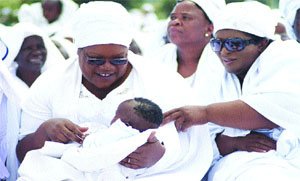 An HIV positive Gutu woman, who is a member of the Johanne Masowe apostolic sect, allegedly had an incestuous relationship with her 19-year-old son in the belief that she would be cured of the deadly virus.

The 36-year-old woman also allegedly forced the son to rape her five-year-old daughter after the child caught them being intimate at a church gathering.

The woman and her son yesterday appeared before Gutu resident magistrate Mr Nyasha Vitorini facing charges of having an incestuous relationship for a period spanning over six months. They were also jointly charged with rape after the woman assisted in the sexual abuse of the child.

Mr Vitorini remanded the pair, who were not asked to plead, in custody to 15 October. Prosecutor Ms Agatha Gabriel said the woman and her son indulged in sexual activities between 2011 and April this year.

She alleged that the woman forced her 19-year-old first born son to be intimate with her in the belief that she would be cured of the deadly virus.

The alleged incestuous relationship between the woman and her son continued until the woman’s five-year-old daughter caught the pair being intimate at an all night church gathering. The woman allegedly forced her son to also be intimate with the juvenile daughter.

The matter only came to light after the woman’s neighbours became suspicious after noticing that the juvenile was having difficulties in walking. The daughter implicated her brother for raping her and a report was made to police who then arrested the girl’s brother.

The suspect then implicated her mother for allegedly forcing him to be intimate with his sister.