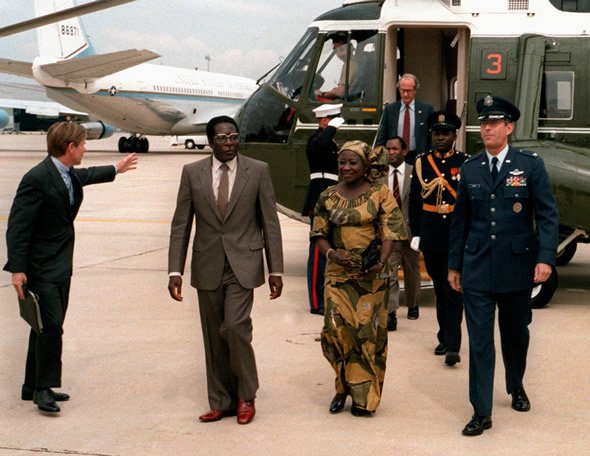 Prime Minister Morgan Tsvangirai has been sliding on political grease this week after former lover Locardia Karimatsenga Tembo approached the High Court twice in two days, first seeking US$15 000 a month in maintenance and then trying to stop his wedding to Elizabeth Macheka this coming Saturday.

Tsvangirai spokesman Luke Tamborinyoka believes there are “Two CIO operations: Operation Blackhawk and Operation Spiderweb financed to the tune of US$100 million dollars to cause maximum damage” to the PM. “Today it’s a lawsuit. Tomorrow, an application to stop the wedding,” he said.

This article does not seek to exonerate Tsvangirai but simply point out the hypocrisy and double standards exhibited by his political opponents in Zanu PF who have pounced on his personal problems to extract political capital. It is off course the nature of politics to do this, but so is it our role as media to expose.

President Robert Mugabe ‘snatched’ his current wife Grace Mugabe from under the nose of then Air of Zimbabwe (intelligence officer) and husband Stanley Goreraza. The current First Lady then known as Grace Marufu worked as Mugabe’s secretary before she became his mistress while still married to Goreraza.

At the time Mugabe’s first wife Sally Mugabe was battling a chronic kidney ailment while Mugabe was having an affair with Grace. The affair resulted in two children, Bona, named after Mugabe’s mother, and Robert Peter, Jr.

Sally was never able to have any children with Mugabe after their only son, Michael Nhamodzenyika Mugabe, born 27 September 1963, died on the 26th of December 1966 from cerebral malaria in Ghana where Sally was working.

Sarah Francesca (Hayfron) Mugabe, popularly referred to as Sally Mugabe, was Mugabe’s wife until her death in 1992. On the 17th of August 1996, Mugabe married his former secretary, Grace Marufu, 41 years his junior, with whom he already had two children while she was married to Goreraza.

Meanwhile Mugabe dealt with Grace’s husband, Wing Commander Stanley Goreraza by dispatching him to work as a defence attaché at the Zimbabwean embassy in China. Goreraza and Grace had one child, a son, Russell Goreraza, who now manages his mother’s extensive farm property, Gushungo Dairy.

Last year in December, it was perhaps unsurprising when Mugabe departed from his usual vitriol against Tsvangirai and urged the state controlled media to back off and stop talking about the Premier’s love affairs.

Mugabe said Tsvangirai’s “love life” and choices did not justify the “hullaballoo” in the media, adding the PM was free to choose his bride.

“We want peace, we want people to be happy, we don’t want them to live in fear and we want them to be their own masters, mistresses, to marry people they choose. He who wants many wives, one or two, it’s his own choice.

“If one chooses his wife, why should people mind about that? It’s his own choice. Now newspapers write about that (the PM’s ‘marriage’) and are on his case, why? We don’t have that policy (one-man/one-wife) because we know our elders had many wives.

“My father had two, my maternal grandfather had one, my grandfather Karigamombe Matibiri had five. When he came to church, it was not possible to throw away the other wives and he was told to choose one and he chose the youngest and wedded her.

“He was told that the others would continue to stay with him, but not as his wives. Imagine people who were your wives and you stay with them without doing anything to them, but just looking at them,” Mugabe said.

Several years ago it was reported how the Reserve Bank of Zimbabwe governor Gideon Gono was “having year-long secret trysts with former Miss Zimbabwe and Miss Malaika winner, Brita Masalethulini.”

To make matter worse when Gono’s wife Hellin found out about the affair, Gono bluntly refused to end the relationship and even sought to formalise the relationship with Brita by entering into a customary marriage.

Gono allegedly showered the then 27 year old Brita — 16 years his junior — with presents and promises that he would marry her. The two are said to have met during fund raising activities for beauty pageants, including the Miss Malaika 2002 pageant hosted in Zimbabwe.

When Brita became a mother at 28, she had to fight off speculation that the baby was Gono’s. She later confirmed the baby’s father was Harare businessman Tongai Kasukuwere, younger brother to Youth and Empowerment Minister Saviour Kasukuwere.

Gideon Gono’s bed hopping antics did not end there. His wife Hellin had to put up with finding out that Gono fathered an illegitimate child with former television personality Nanette Silukhuni, who also had an affair with another “bed-hopping love rat” in Local Government Minister Ignatius Chombo.

Gono at the time was paying maintainance for his then four-year-old daughter with Silukhuni. The former ZBC presenter was forced to make the admission in court papers after Chombo’s jilted wife Marian Mhloyi filed a Z$2 billion dollar lawsuit against her. She later divorced the minister.

In yesterday’s Part 1 we forgot to mention how Marian wrote a letter to President Robert Mugabe asking him to intervene in the acrimonious divorce between her and the Minister. She exposed how Chombo had four other wives, Nanette Silukhuni, Angela Rugara, Bessie Mugabe and Chipo Jandya.

Join me tomorrow (Wednesday) for Part 3 of this series. You can also follow me on twitter @LanceGuma