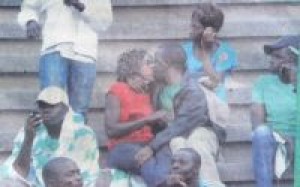 The Social Scene page of scandal sheet, Hmetro has exposed a ‘social sin’ where a married man was pictured kissing his suspected small house at the National Sports Stadium.

The man has been identified as one Trymore who did not dispute his marital status or that he was the man in the picture but he said it was just a casual kiss and ‘one of those things’. “Zvinowanikwa (it’s part of life),” the father of three said.

Sources said Trymore had just reconciled with his wife after he was caught cheating. However, Trymore refused the allegations of cheating saying that it was his first time to be caught in such a situation. He claimed to be a responsible family man and had no problems with his wife.

“They are all lying to you. That was the first time it has ever happened and for your own information, I am not in trouble with my wife. Actually, today I didn’t go to work, I spent the whole day with my wife. I am not in love with the girl in the pictures. Haana kana basa (she is useless),” he said.

Sources said Trymore was living off handouts from his UK based in laws. But he was ungrateful.

Trymore said this was rubbish.”I am employed by the Ministry of Finance at the Head Office and you can call them to confirm. Ndinochengeta vana vangu ndega handibatsirwe nemunhu (I look after my own children without anyone’s help),” he added. H Metro

The most beautiful Miss Zimbabwes since 1980