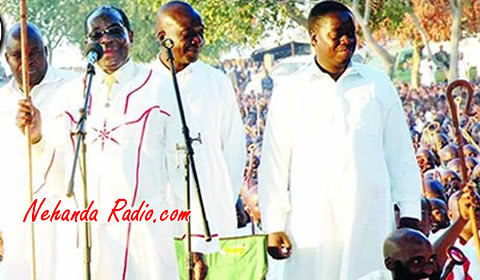 Zanu PF’s campaign strategy ahead of the forthcoming general elections will hinge on infiltration of churches, neutralisation of civic society and use of traditional leaders to whip the rural electorate into line, internal party documents have revealed.

According to Zanu PF’s 2010 and 2011 central committee reports, the party’s campaign will be anchored on the land reform and indigenisation programmes. Zanu PF has been pushing for fresh elections since 2010 and this position is reflected in the reports obtained by NewsDay last week.

Part of the 2011 central committee report states: “These activities involved a visit to church gatherings and conferences, meetings and traditional leaders, minority groups and members of the business community.

“His Excellency, the President and First Secretary Cde R G Mugabe, pioneered the programme by paying a visit to the Johane Marange Apostolic Church gathering in Marange. Other members of the Presidium followed suit as guests of honour at various gatherings.”

Over four million Zimbabweans are estimated to be members of the mainline churches which Zanu PF is targeting. In April this year, Zanu PF political commissar Webster Shamu addressed scores of members of the Guta Ra Mwari (Zvimiso) Church at its Holy Shrine in Nyazura.

In his address, Khaya Moyo pledged to dole out land and three boreholes to the church members and urged those interested in owning residential stands to approach Chombo. The party has gone a step further to use compromised preachers to prop up the Mugabe regime at church gatherings.

Zanu PF has also courted the support of traditional leaders, according to the reports.

To date, several chiefs have been allocated farms and service vehicles, a move that has been widely condemned as a vote-buying gimmick. Most chiefs have in the past openly declared their allegiance to Zanu PF while others are reported to have threatened to evict non-Zanu PF members from their areas of jurisdiction.

According to the reports, the youths would be lured through the indigenisation programme while “Western-sponsored” civil society’s resistance would be neutralised by the establishment of “progressive” organisations.

“The indigenisation programme and economic empowerment policy were reaffirmed as the main policy of the party and it is the message Zanu PF will take to the electorate,” the party said although in public it has described the policy as a national programme which deserves support from all political parties. NewsDay