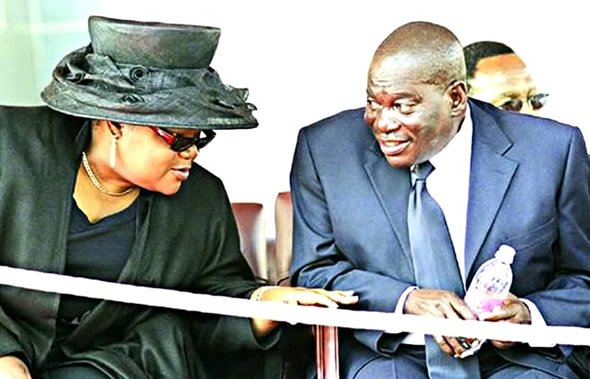 Just over a year after the death of former army commander General Solomon Mujuru in a mysterious firestorm, his sprawling business empire — meticulously built over 30 years — has started crumbling with the provisional liquidation of his flagship company River Ranch diamond mine, and the controversial sale of the mine’s headquarters in Gunhill, Harare.

The recent arrest of his close business associate Tendai Mundawarara, NMB board chair, on allegations of swindling a Dubai jewellery company of more than US$280 000 in a botched gold deal is another indication the Mujuru business structure is slowly, but surely, collapsing.

Mujuru, who made his wealth using his vast political networks and influence-peddling, had interests in agriculture, stock and money markets, finance, construction and mining. Apart from River Ranch Mujuru reportedly had interests in many other companies, including the Zimbabwe Mining and Smelting Company (Zimasco).

The late general lived at his Beatrice farm, which had modern equipment, cattle and wildlife worth millions, that he seized during the land reform programme. Mujuru, who also had an interest in Marange diamonds although government blocked his business partners there, also wanted to muscle in on Zimplats.

According to whistle-blower website WikiLeaks, former Zimplats CEO Greg Sebborn reportedly told US embassy officials Mujuru had tried to arm-twist the mining firm to choose him as its indigenisation partner in return for “political protection” from the Chinese whom President Robert Mugabe wanted to impose on the company.

Mujuru died a night before he was due to travel to Beitbridge to completely take over River Ranch. However, his empire and estate, which are likely to be hotly-contested after recent revelations many children sired outside wedlock have turned up to lay claim to their fair share, has started crumbling.

River Ranch was recently put under provisional liquidation after its major shareholder, Rani Investment, whose boss Saudi-based tycoon Adel Abdul Rahman al Aujan had an acrimonious feud with Mujuru before his death, filed a High Court application requesting the winding up of its operations.

Winsley Militala was appointed provisional liquidator. The Dubai-based company said it applied for liquidation as it could no longer sustain itself. It said it has been subsidising the running of the mine while negotiating the sale of its shares, first with Khupukile Resources, and then later Zimbabwe Mining Development Corporation.

The fight for the money-spinning asset recently took a dramatic twist when the Mujuru family woke up to the news that the Gunhill offices were sold four months ago, in the clearest sign yet that the late general’s empire is disintegrating.

Information gathered by Zimbabwe Independent shows the Mujuru family has lost the River Ranch headquarters located at No 99 Churchil Avenue, Gunhill, Harare, which it had been trying to buy from Rani Investment.

Investigations by Independent show a company linked to Mines and Mining Development minister Obert Mpofu bought the property four months ago, a move which is likely to strain relations with Vice-President Joice Mujuru, given the acrimony around the property.

However, to Mujuru family’s surprise, they only discovered this week the property had been sold. A close family and business associate said:

“The Mujuru family wanted that property to perpetuate the legacy of their father and all other properties associated with the general. We wanted to secure that property so that it could have been part of the Mujuru Foundation.”

He added: “It is intriguing that a former colleague of the general is seen purchasing that property which is under dispute. This creates unnecessary tension and betrays Mai Mujuru’s trust.”

In response to questions by the Independent, Rani Investment CE Salim Bitar said the property was actually owned by Aujan Southern African Development, a company privately held by Aujan, not River Ranch.

“Its only relationship with River Ranch mine was that it has been used as a Harare address for the mine. The house was sold earlier this year to a local company,” he said.

The Mujuru family in January this year accused Aujan, who clashed with general over the mine in Victoria Falls three months before his death, of reneging on an understanding to sell the River Ranch offices to Khupukile Resources as initially agreed.

According to a letter from Khupukile Resources director Nyasha Mujuru del Campo to Aujan, dated January 31 2012, the Saudi businessman initially agreed to sell the offices to the Mujuru family for US$400 000, in addition to his 80% stake in River Ranch mine.

“We told you that it was impossible because in Zimbabwe most things, other than shops, close between December and mid-January.”

However, Nyasha said she arranged with the company’s bankers, CBZ Bank, to transfer US$400 000 to be held in trust by Aujan’s lawyers Sawyer & Mkushi.

According to Nyasha, CBZ failed to pay on time as it was experiencing liquidity problems at the time. While still trying to make the payment, the Mujuru family got a letter from Aujan’s lawyer Honour Mkushi of Sawyer & Mkushi in mid-February advising them the property would no longer be sold to them because the payment had still not gone through.

“However, the legal advice we have received is that the late receipt of the money by Mr Mkushi does not mean that you can cancel the sale. Firstly, there was no provision in the agreement we entered into that payment had to be made by December 31, January 7 or any other date. Secondly, even if a fixed date had been agreed to, where the late payment was not due to us not having the money, but due to CBZ not having it, then we are not liable for the default and therefore the agreement cannot be cancelled because of late payment,” reads the letter.

Nyasha said then the Mujuru family eventually paid the money and would not accept reimbursement, adding that they would remain in possession of the property, fuelling the conflict between the two parties.

“Khupukile Resources was offered the opportunity to purchase the private property of Mr Aujan but failed to do so. Likewise Khupukile Resources was given the first option to purchase Rani Investment’s shares in Limpopo mining Resources, the company that owns the River Ranch mine. However, Khupukile failed to produce an offer, Rani Investment entered into negotiations with the Zimbabwe Mining Development Corporation.”

Bitar: “The process of liquidation is moving forward while giving time to the ZMDC to conclude an offer.”

Aujan in February stated he was looking for other buyers of his 80% shareholding at a nominal price, provided the purchaser buys the majority shareholder’s loan account then standing at about US$16 million. These dramatic events have left Mujuru’s business empire gradually falling apart. Zimbabwe Independent