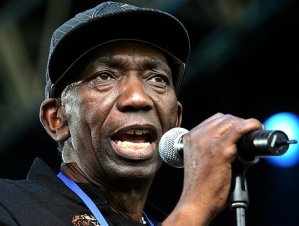 A hero’s welcome awaits Dr Thomas Mapfumo when he comes home for his first gig after an eight-year absence from the local scene. The gig, which is scheduled for this September, comes after a public spat between the Chimurenga music maestro and business mogul and music promoter Philip Chiyangwa over the situation in Zimbabwe.

However, the two have decided to bury the hatchet by agreeing to stage a big homecoming show at Ochi City in Harare. In an interview with The Herald Entertainment, Chiyangwa appealed to the nation to view Dr Mapfumo as an artiste.

“A lot has been said about Dr Mapfumo and a lot of it cannot be substantiated because as a celebrity people talk a lot of negative stuff and I would like to appeal to everyone to accept him as an artiste not a politician.

“I understand his position and I appreciate him more as an artiste so let’s support him and when he comes I want fans to give him a resounding welcome befitting a hero. If there is anyone to blame it’s the people because they changed Mapfumo.

“So when he comes he will be chauffeur-driven in a Rolls Royce from the airport to his home plus there will be several other top-of-the-range cars in the convoy,” Chiyangwa said. Chiyangwa said he was bringing in Dr Mapfumo because he was the revered “King of Chimurenga” music.

“Dr Mapfumo is what Michael Jackson was to pop music, he is the King of Chimurenga and the gig is going to be one of the biggest that fans have seen to date.

“Since I have known him, he has always been a great musician and that is what I will always remember about Dr Mapfumo. Those who know me well will tell you that I am not into small time money and what we are talking about is a world-class event,” he said.

The 67-year-old man of song will be accompanied by special guests from his record label while at the gig he is expected to share the stage with some of Zimbabwe’s top performers who are yet to be named. About the venue, Chiyangwa said Ochi City was the appropriate one since it was an outdoor hangout with hotel facilities.

“We are yet to finalise the date for the gig because we want it to be part of Dr Mapfumo’s world tour next month. For now we have agreed about the contract and I am probably bankrolling everything. The venue can take up thousands of people and it is a beautiful venue for the sort of gig that we want to stage,” he said.

Cuthbert Chiromo, who is Dr Mapfumo’s local manager, confirmed that the “Vanhu Vatema” hitmaker was heading home. “Mudhara arikuuya (he is coming) and we hope it is going to be a successful show since he has not been around for close to eight years now,” he said. The Herald

Connor one of the worst coaches at CAPS United