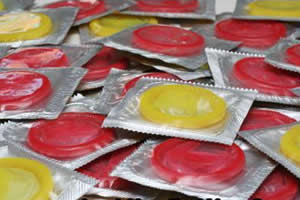 TRADITIONAL leaders and parents in Chiwundura District want schoolchildren to be given condoms to protect themselves from sexually transmitted diseases and unwanted pregnancies.

Speaking at a dialogue workshop organised by Padare and Safaids at Chief Gambiza Township on Thursday, traditional leaders said it was high time Government intervened to stop young people from being infected.

Chief Fred Gambiza said times had changed and schoolchildren were sexually active at a tender age hence the need for them to be given condoms. “Now there is Aids that is affecting our children because we have been conservative yet there are measures of stopping them from being infected,” Chief Gambiza said.

“Parents are not counselling their children hence these children are being infected and are dropping out of school because of these pregnancies.

“If they are to be given condoms, they won’t be infected. Condoms should be given to students who are in high school especially those who are already sexually active. We cannot continue pretending as if they are not indulging, our children will die young.

“I know the message has been about abstaining, but if they can’t abstain, let us look at the alternatives, which in this case are condoms.” Chief Gambiza said.

He said he had adjudicated over cases of teenage pregnancies at his courts. Village head, Mr Webster Bidi, said there were so many teenagers in his area that had dropped out of school because of pregnancies.

“Some girls have been impregnated while at school and this trend has been going on for some time now. We have to give them condoms to protect our children, both boys and girls,” Mr Bidi said.

Mrs Miriam Dzete said it was inevitable for teenagers to be infected or impregnated because they already indulged in sex.

“Most school going boys especially those in secondary school drink beer and they take drugs. When they are under the influence, they just sleep with women without protection because they are not being availed to them.

“It is important that we protect this generation by making right decisions that are meant to protect them,” she said. Added Mrs Grace Munikwa: “We may continue with the message of abstinence, but we have to be alive to the fact that just speaking will not stop someone from engaging in sex.

“We have to protect our children by giving them condoms especially those who will be in Form Three or Four because if we don’t do that, we will regret.”

St Patrick’s High School Headmaster, Mr Stephen Madehwe, said it was important for parents to exhibit good behaviour at home so that their children can emulate them.

Ministry of Health and Child Welfare health promotion officer for Gweru district, Mrs Irene Zvenyika, said not all students were supposed to be given condoms but those who are sexually active.