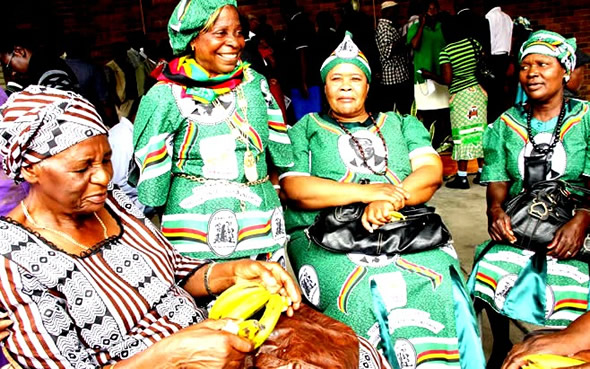 The group was travelling back into the country after a tour of the Chimoio Shrine in Mozambique where thousands of liberation war fighters were buried in mass graves.

According to an internal police memo, the party activists travelling in three hired buses arrived at the border post on May 22 and refused to declare their goods packed in bales. It later emerged the consignments comprised second-hand clothes worth $63 746.

Part of the memo reads: On 21 May 178 women from Harare and Bulawayo province womens league (sic) went to Mozambique and proceeded to Chimoio Shrines with two Pioneer buses and one ZUPCO bus.

Upon return (the following day) they bought several items including second-hand bales of clothes. They broke them and repacked them into 50 kg sacks and loaded them onto buses covered with tape line tents.

The leader of the group, identified as Last Mbizvo, who is Zanu PF Harare province secretary for education, incited his group to sing revolutionary songs in protest over Zimra officials demands.

According to the memo, the group later drove off without paying for its consignment, prompting Zimra officials to report them to the police. Police followed up the buses and intercepted them at the corner of Park Road and Beira Road in Mutare at around 8pm.

The group was ordered to return to the border, but again broke into protest songs, forcing the police to guard the buses all night. The following morning, senior war veterans from Mutare intervened in the stand-off and convinced them to drive back to the border post.

Back at Forbes Border Post, the party activists refused to declare their consignment, resulting in the seizure of their consignment under serial numbers 045651-045850. Their hired buses were also impounded under seizure number 045682-4. The bus drivers are set to appear in court soon for allegedly facilitating the smuggling. NewsDay