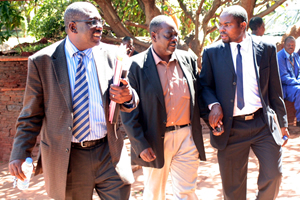 Post-mortem results for the 11 children who died at Lake Chivero on Christmas Day last year cannot be used in court as evidence because the doctor who performed the examination is incompetent, defence lawyers have said.

Mr Jacob Jogee who is representing one of the boat crew, Joseph Abrahams (37) objected to the tendering of the results by the State. Abrahams is jointly charged with the boat owner, Latif Ameer (53), Fadil Ramon Weale (27) and Enock Yolani Zulu (36), on 11 counts of culpable homicide.

Hamios Mukonoweshuro, who is representing Ameer and Weale, concurred with Jogee.

Prosecutor Michael Reza wanted to tender the post-mortem results to the court but Jogee objected on the basis that Dr George Frank, a registered medical doctor, who carried out the post-mortem, was not a qualified pathologist.

“Ordinarily, we would not have objected to the tendering of the post-mortem results as requested by the prosecutor but because this doctor is not a registered pathologist, we apply that he be summoned to appear in court before the results are accepted into the record,” said Jogee.

After hearing submissions from both counsels, magistrate Tendai Mahwe briefly deferred the matter to allow the State to summon Dr Frank.  When proceedings resumed, Reza told the court that he failed to get in touch with Dr Frank. He said he needed more time to subpoena Dr Frank through the investigating officer.

The matter was then remanded to June 7 when Dr Frank is expected to testify.

Allegations are that on December 25 last year, Ameer asked Zulu to drive the boat and Weale to collect money from passengers. He allegedly failed to provide life jackets to passengers in the boat.

As the boat was in the middle of the lake, water started getting in and passengers panicked and moved to one side. The overloaded boat capsized, resulting in the death of 11 children.