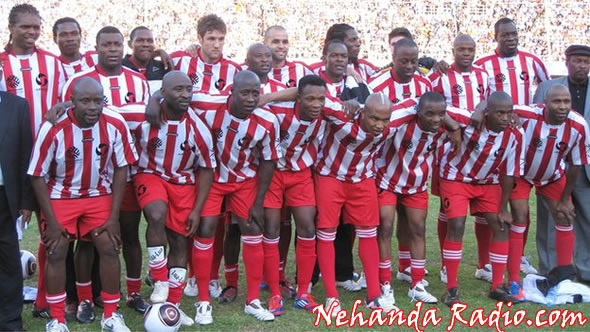 The match featured the Warriors and Mwaruwari’s Africa Stars Friends. The match, which the Warriors won 7-4, attracted an estimated 40 000, as Mwaruwari played his last game in a Warriors jersey.

Mwaruwari featured for the Warriors in the first half and then for the Africa Stars in the second before he was substituted to be replaced by his son, Benjani Junior. Mwaruwari scored in both teams.

Despite the events between Zifa and the organisers of the match that took centre stage just before the game and the absence of some of the promised players like Austin Okocha, Emmanuel Adebayor, and Alex Song, the crowd still enjoyed every bit of the afternoon with Senegalese striker, El Hadj Diouf, being the star of the show.

Diouf was a ball of fire igniting attacks whenever in possession and gave Warriors defender Tapuwa Khumbuyani a torrid time with his silky skills and dribbling.

He capped an outstanding afternoon with a gem of a goal but ended on the losing side as the other two goals from Mwaruwari’s son, Benjani Junior, could not meet the seven goals that the Warriors plundered.

Although the Warriors were not all that impressive, coach Rahman Gumbo defended them saying the team had only one training session ahead of the Africa Stars match. He said the Warriors will start full preparations for the World Cup qualifier against Guinea on Monday.

Proceeds from the Mwaruwari match will be used to start the Benjani Mwaruwari Foundation, whose primary aim is junior football development. Radio VOP

Advantages of dual citizenship for Zimbabwe