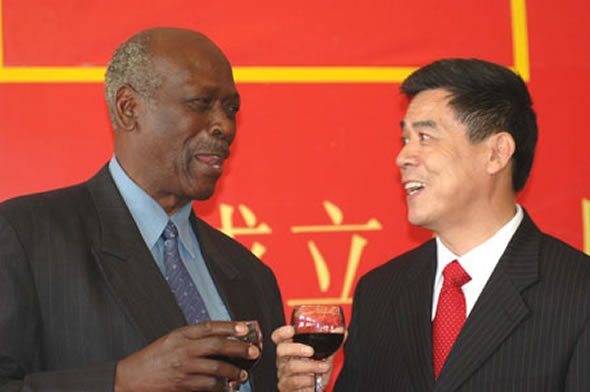 Masvingo- Minister of Higher Education, Dr Stan Mudenge, tied the knot for the third time at his Bawa rural homestead in Chief Zimuto on Saturday, a wedding which was snubbed by Zanu (PF) big wigs.

Mudenge’s second marriage was witnessed by President Robert Mugabe at Gokomere mission together with a large crowd.

But this time around only a handful of people witnessed his marriage to Mildred Kada together with Masvingo provincial governor Titus Maluleke, two Members of Parliament and top ally senator Josiah Hungwe.

The visibly ill Mudenge had to be helped to walk by his best man, at a ceremony presided by Catholic Father Jaya. Close sources from Zanu (PF) said although wedding invitation cards circulated a few weeks ago, party carders said they were now fed up by Mudenge’s weddings.

“People have other things to do; they can’t keep going to Mudenge’s weddings. Zanu (PF) members support each other but on this one, people thought it was wiser for Mudenge to hold a secret wedding at the Magistrate’s court,” said the source. Mudenge’s first and second wife died in 2001 and 2004 respectively.