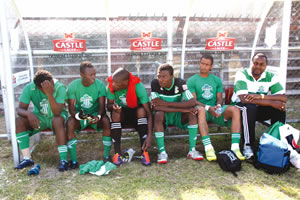 ZIFA have come out in full support of the Premier Soccer League leadership in the ground row that led to the abandonment of the derby tie between CAPS United and Motor Action on Sunday. The country’s football mother body, who are worried about growing ugly incidents in the top-flight league, insisted that the league’s chiefs are the competent body that should decide on the grounds to be used for matches.

One of the biggest consideration, in such decisions, was the security at the stadium. Zifa, who deplored the events that characterised the abortive Castle Lager Premiership derby clash between the Mighty Bulls and the Green Machine, also said the top-flight body had the capacity to resolve the dispute in terms of their rules and regulations.

Motor Action’s Week Three assignment against CAPS United, scheduled for Gwanzura on Sunday, failed to take place after a dispute arose between the Mighty Bulls and the PSL on the choice of the venue. It was Motor Action’s contention that as the home they had the prerogative to choose their home ground and had indicated that they had opted for the Motor Action Sports Club after they failed to secure Rufaro as an alternative ground.

The Mighty Bulls then stuck to their guns and boycotted the game at Gwanzura with their no show at the Highfield venue leaving CAPS United, referee Robert Mugorosa and thousands of fans waiting in vain. Zifa vice-president Ndumiso Gumede, yesterday described the weekend dispute as “an unwelcome development’’ and dismissed claims that the association should not intervene in the matter.

Gumede noted with concern that the local game was being brought into disrepute over “simple matters that should be played by the book.” The Zifa vice-president also reiterated that PSL chief executive, Kenny Ndebele, should have the final say on match venues and fixtures as it was in line with his mandate. Zifa, Gumede said, would not meddle in the decision to be taken over the abortive match as they believe that the PSL had the capacity to resolve the matter.

Instead, Gumede felt that the row which left the league and its sponsors embarrassed and the fans feeling shortchanged was a result of some simmering undercurrents in the PSL corridors of power. It’s very likely that CAPS United will be awarded the match on a 3-0 scoreline. Gumede said Zifa were worried by the rate at which disputes, including the sponsorship row between the PSL, Dynamos, NetOne and BancaABC, were threatening to mar the domestic game.

“I think it is important for people to divorce personality problems from the established norms of football administration,” said Gumede. “And we think the PSL has the capacity to deal with the matter so that it should never occur again as such cases have the potential to destroy the goodwill that had started to come to football in general and the PSL in particular.

“We are concerned by the unprofessional incidents that have arisen as the PSL season begins. From our perspective it is clear that we need to improve on our capacity building exercise. It is our view that these problems emanate from lack of understanding of basic tenets of football administration as enshrined in our rules and regulations.

The veteran administrator is also worried by the non-availability of the National Sports Stadium to football on a regular basis but acknowledged that both Zifa and the PSL had been left with their hands tied. The giant facility was now being run by a company that was focusing more on making business than sporting considerations.

“Until government issues a directive to say that the National Sports Stadium should be reserved for sport over the weekends, the company to which the stadium was leased will always hire out to the biggest revenue earner for them. So if (Pastor) Makandiwa is paying more to hire the ground then what can stop that company from giving him preference?

“As business people we understand why they come to that conclusion but as sports people we are aggrieved that the facility was built for sport in the first instance,’’ Gumede said. Gumede also warned the local football family from “just making noise about emulating other leagues without closely assessing the situation prevailing here’’.

“If we think the South African PSL is one to emulate then our teams must be prepared to be moved to different venues all the time because teams like Kaizer Chiefs and Orlando Pirates do not always play on Soweto, they can be in Port Elizabeth, Rustenberg or Polokwane. But all this is done when security considerations have been done.

“One might also ask why Zifa are being concerned but it must be known that if there is death or a stampede there Fifa will demand answers from Zifa and not from some obscure club or an obscure club official. So we are not delving into private matters because ultimately as Zifa we are involved,’’ Gumede said.

It is also emerged yesterday that following the dispute between Motor Action and the league, the PSL executive had consulted and resolved that the abortive match should have been played at Gwanzura, a position that appears to weaken the Mighty Bulls case. Ndebele wrote to Mighty Bulls director Eric Rosen on Friday advising him the PSL leadership’s stance on the row.

Ironically, Rosen is also part of that leadership in which he is the board member finance.

“We acknowledge receipt of your letter dated Friday 13th April 2012 and advise that we have consulted the executive committee members and the decision is that the Castle Lager Premier Soccer League match between Motor Action FC and CAPS United FC shall not be moved from Gwanzura Stadium to Motor Action Sports Club. The match remains scheduled for Sunday 15 April 2012 at 1500hrs. All the stakeholders have been advised accordingly,’’ wrote Ndebele.

Rosen, however, defied that communication and insisted the match would have to be at Motor Acion Sports Club where his team, some police details and handful of supporters waited for CAPS United to arrive.