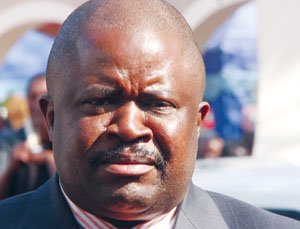 HARARE- The controversial promotion of Douglas Nyikayaramba by President Robert Mugabe last year from Brigadier-General to Major-General has come to haunt the military amid claims of divisions within the army as some quarters complain that better qualified officers were overlooked for promotion.

Nyikayaramba, who commanded the Three Infantry Brigade in Manicaland prior to his elevation, has been at the centre of controversy and criticised for often overstepping his role in the barracks and actively dabbling in partisan party politics. His behaviour and remarks have come to symbolise what the MDC-T and MDC-N parties in government view as a problematic role of the military in local politics.

Sources confirmed to the Zimbabwe Independent that there is a criterion for promotion in the defence forces which is not being adhered to. Appointments in the military are now said to be partly based on political considerations instead of merit.

“First there must be a vacancy in the rank structure and officers vying for the post should have gone for promotion examinations,” said the source. “Issues of paramount importance also include seniority, professionalism and in the case of a major-general, a course in command and staff is mandatory,” said the source.

However, the sources said there were a number of irregularities being viewed with suspicion in the military in Nyikayaramba’s case. They said officers like Brigadier-Generals Herbert Chingono and Fidelis Satuku, who are under investigations for alleged WikiLeaks disclosures, are better qualified and should have been promoted ahead of Nyikayaramba.

For example, Chingono was the last Zimbabwe National Army commander to train at the US National Defence University under the International Military Education and Training programme in 1999, while Satuku received his military training in Britain.

The two commanders are said to be highly respected in military circles and the Nyikayaramba promotion has complicated the situation. The sources said the way Nyikayaramba was promoted had been problematic to his colleagues. “Preceding his appointment, he had declared his partisanship position which warrants a disciplinary action before a court martial and a cause for disillusionment in the military,” said the source.

At one point, Nyikayaramba was involved in the constitution-making process and has called for Mugabe to be “president for life” and demanded that “elections be held this year (2011) to ensure political stability in the country”. He also proclaimed that “I am in Zanu PF and Zanu PF is in me and you can’t change that”.

He has also made several statements intimating that the MDC would never rule Zimbabwe. National Housing minister and MDC-T secretary for defence Giles Mutsekwa, who is also a former army colonel, confirmed the disgruntlement in the barracks over Nyikayaramba’s promotion.

“A lot of people in the military are expressing disgruntlement over this issue,” said Mutsekwa. “However, it is the president who is commander-in-chief of the defence forces who promotes, especially on appointments such as brigadier going upwards. However, in this case the promotion was a reward for Nyikayaramba’s constant attacks on the MDC-T president Morgan Tsvangirai,” he said.

Mutsekiwa said besides the utterances by Nyikayaramba, the appointment, which was made during the current lifespan of the inclusive government, was not in tandem with the Global Political Agreement. “This appointment did not go in line with the GPA which stipulates that military practices be conducted in a manner that ensures that no political or other form of favouritism is practiced,” said Mutsekiwa.

Mugabe in secret deal to hand over to Mnangagwa