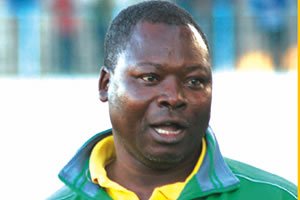 MOSES CHUNGA said he was lucky to be alive after his car crashed into a ditch in Harare yesterday — just a few hours before he laid his late father to rest at Warren Hills cemetery. The former Zimbabwe senior national football team captain was alone in his Toyota Corolla, which was extensively damaged, when the accident occurred in the early hours of yesterday.

Chunga said one of the car’s front tyres burst, as he drove along Simon Mazorodze Road in the Waterfalls area, and he lost control of the vehicle, which veered off the road and slammed into a ditch. The legendary footballer, whose mouth was swollen, suffered hand and back injuries and was visibly in severe pain when he attended his father’s burial at Warren Hills yesterday.

“There was a tyre burst and suddenly I lost control of the car and it skidded off the road and then landed in the ditch,” said Chunga. “My left hand is swollen and there is a lot of pain and my mouth is also swollen because of the impact and I can also feel a lot of pain in my back. It’s unfortunate that’s what happened and the good thing is that I’m alive and I’m a lucky man right now.”

Chunga was taken by members of his Soccer Coaches Union of Zimbabwe to a private clinic in Harare, soon after the burial of his father, after he complained of severe back pains. He was treated by CAPS United doctor, Mordecai Sachikonye, and advised to go home and rest. Newsome Mutema, the SCUZ secretary-general, was one of the union’s members who accompanied Chunga to the private clinic.

“He told us that he was having back pains and we felt that he urgently needed a doctor who could tell whether this was being cause by some internal injuries,” said Mutema. “Dr Sachikonye observed Bambo and he prescribed some medication and advised him to go home and rest. Bambo will be going back for a review soon.”

Zimbabwe National Soccer Supporters Association leader, Eddie “Mboma” Nyatanga, said what was important was that Chunga had survived the accident. “We believe what is important right now is that Moses Chunga survived that crash because if things had happened otherwise, the loss would have been unbearable to the family,” said Nyatanga.

“We cannot control fate and an accident can happen anytime to anyone and it’s just sad that Chunga’s accident happened at a time when he was mourning his father. We should celebrate the fact that he survived the crash because that is what matters most and we will try and help him, as an organisation, as much as we can during a very difficult time for him and his family.

Chunga’s father, Andros Kawizi, died at a Harare hospital on Friday after battling ill health for some time. His funeral ceremony, at his home at 7 Kafudzamombe Street in Mufakose, turned into a celebration for the life of a man whose sons, Moses and Kembo, made a huge impact at Dynamos in the ‘80s. Moses, who later captained the Warriors, made history by becoming the first Zimbabwean player to be signed by a European football club after Independence when he joined Belgian side, E. Aalst from DeMbare.

Although both Freddie Mkwesha and Bruce Grobbelaar joined European clubs before Chunga, their moves came before Independence with Mkwesha moving to Portugal while The Jungleman moved to England via Canada. While Kembo was also a quality footballer, he lived in the shadows of his more talented younger brother whose arrival at Dynamos gave the Glamour Boys the hero they had been looking for to fill in the big shoes left by George Shaya. Dickson, the third of the Chunga brothers to play for Dynamos, did not enjoy as much success as his elder brothers.

The Chunga family home in Mufakose overlooks a council football field, which remains in good condition, where a number of players, who later made a big impact in Zimbabwe football, honed their skills. It’s a football neighbourhood as the late Gift M’pariwa used to live just three rows on the other side of the street, Mike Abrahams a few houses down the road and Clayton Munemo just a stone’s throw away.

Former Zimbabwe international midfield hardman, Ernest “Sekuru” Makosa, is one such footballer who used that council stadium to fine-tune his football skills. And, as he paid his last respects to the late Andros Chunga at his home in Mufakose on Sunday evening, couldn’t resist going down memory lane to relive some of the great challenge football matches that were played on the council pitch.

“Those days were good and we had a lot of very good players in the area who could play for any of the top teams in the country,” said Makosa. “Football made us what we are today and the old man (Andros) gave us some very, very good players.” Makosa is the father of Zimbabwe international striker, Cuthbert Malajila.

Mufakose was also home to the late Joel Shambo and Stanley Ndunduma, two of the finest footballers to grace Zimbabwe’s football fields. The late Andros Kawizi Chunga, who was 77 at the time of his death, was buried at Warren Hills yesterday with the entire football family in the capital represented at his burial ceremony as a mark of honour for his contribution to the game in this country.

Bekhi Nyoni, who heads a rival coaches’ union to the one led by Chunga, attended the burial ceremony as boardroom politics took centre stage on a day football showed its brighter side. Norman Mapeza, the Warriors’ coach who was suspended pending the determination of his role in the Asiagate scandal by an independent Zifa committee, was mobbed at Warren Hills by scores of youths from Mufakose calling for his return to duty.