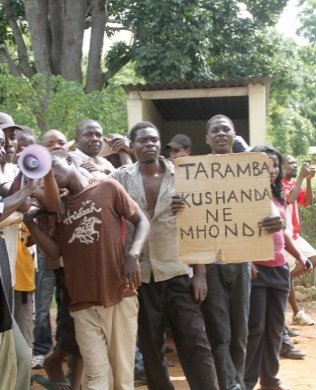 HARARE – Police in Shamva on Saturday evening ran amok, brutally assaulted a man to death and left several critically injured after a senior police officer reportedly commandeered nine juniors to revenge on hapless mine workers after his wife lost a purse with $1.

Shamva yesterday resembled a war zone after angry residents, thronged and barricaded the police station demanding justice following the death of Luxmore Chiwamba who succumbed to injuries he sustained after police officers assaulted him with baton sticks, clenched fists, and booted feet.

Residents said three people had died but police spokesperson, Wayne Bvudzijena maintained yesterday evening that only one person had died during the bloody siege on Ashley Mine compound.

Residents camped at Shamva police station said trouble began after a wife to a senior police officer only identified as Shumba was robbed and lost a bag containing a phone and $1 on Saturday.

Shumba  is said to have enlisted the help of nine officers to try and retrieve his wife’s stolen bag whereupon he conducted a deadly door to door raid on residents of Ashley Mine in which people were forced out of their homes, some naked and were savagely assaulted.

In the dead of the night and under the cover of darkness, the officers launched a vicious attack on Ashley Mine compound demanding cash and cell phones from helpless residents to compensate the $1 loss.

Over a dozen people are said to have been injured during the brutal attack. Ten people were severely injured and are now receiving treatment and recovering at a private clinic in Bindura.

A relative of the deceased, Yvonne Mushita told the Daily News that 10 police officers led by Shumba descended on their family home and beat them up mercilessly.

“They came at around 11pm knocking on the door, they broke down the door and started hitting us with clenched fists and booted feet,” Mushita said.

The informal trader who was overcome with grief and anger said some members of her family managed to escape but Chiwamba was overpowered by the police as they had taken him by surprise.

“He was actually sleeping and they came in while he was naked and when he tried to reach for his clothes they stepped on his chest with their boots and starting kicking him all over the body. He was beaten up until he started crying out to them saying ko muri kundiurairei (why are you killing me)?” Mushita said.

The heartbroken woman said the heartless police officers did not even heed the plea of the dying man when he asked to be taken to hospital.

“They said to him we want blood, someone must die here. They even refused to give him medical assistance even when he started vomiting blood. Even his urine was bloody,” she said.

Mushita who held on to a stick which she used during the demonstration said Chiwamba who is survived by a wife and three children was later on taken to the police station where he was further assaulted.

They demanded that Shumba should come out to face the “music.” Their songs sent messages that they were tired of being ill-treated by the police who have a constitutional mandate to protect them.

The super charged crowd which consisted of men and women of different ages as well as school pupils, held placards denouncing the police. One placard read; “Shumba we have reduced you to a rat,” while another read; “We will not have thieves policing us.”

One of the residents taking part in the demonstration, Adam said he was not shocked  by the police action as police details in the politically explosive city had been holding residents hostage since October last year.

“It was inevitable, this Shumba guy who is the member in charge here is very cruel, he has been terrorising us for a long time. In October he introduced a curfew where if you are seen walking about after 7pm, you will be arrested,” Adam said. Sarah, who runs a flea market stall in the Zanu PF stronghold concurred with Adam.

She said she was sick and tired at the manner in which the police got away with heinous crimes on a daily basis. “We want to know who will police the police since they are the ones who are going about beating up innocent people in their homes.

“I was not beaten up on Saturday because my money saved me, if I had not paid them the $100 they demanded, then my family and I would probably be in hospital,” Sarah said. Women and children were not even spared in the attack. Several grandmothers are said to have suffered broken limbs after the police descended on them.

Angry residents vowed not to leave the police station until Shumba and his men were safely behind bars. Bvudzijena dismissed the incident as an attack on Shamwa residents by the police.

“One person died but it wasn’t an attack on the public by the police. We are still carrying out investigations and we will not leave any stone unturned,” Bvudzijena said. This however, is not the first time that police details have been fingered in brutal attacks against members of the public.

Last week, 24 year old Ernst Marandure was severely assaulted by a police officer in Kuwadzana.  He is recovering at Parirenyatwa Hospital.

The latest attack on innocent citizens by police comes at a time when the two MDC formations which are in government together with Zanu PF have been pushing for reforms in the security sector.

Meanwhile the Zanu PF controlled Herald newspaper is reporting that Shamva Police Station officer-in-charge and seven other policemen have been arrested in connection with the fatal assault over the weekend.

“We are treating it just like any murder case. So there is no favouritism. We are going to carry out investigations until we finalise the case,” he said. Snr Asst Comm Bvudzijena said those who were beaten up were going for medical examinations to ascertain the extent of the injuries they sustained.

“As ZRP we respect the sanctity of human life and these officers have since been transferred from the station to allow investigations to take place,” he said. Daily News/The Herald