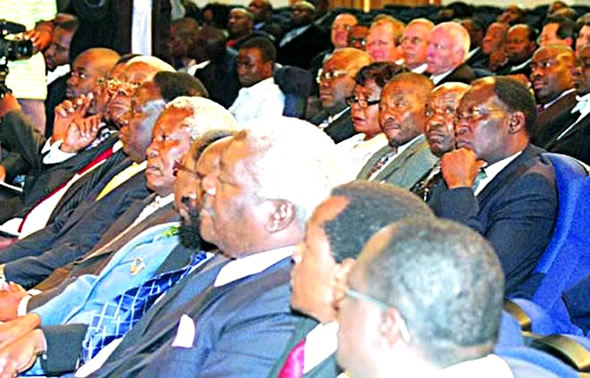 By Gift Phiri and Farai Mutsaka

HARARE – The conspiracy to bleed state power firm Zesa by not paying bills running into millions ran through the President’s Office and state institutions to ministers, the military, MPs and Zanu PF district offices.

A few of Prime Minister Morgan Tsvangirai and Welshman Ncube’s people are also in the mix. But the impunity is shocking.

Top ministers — some who claim to hold vast riches — and just about everyone and state institutions connected to the system amassed huge bills at a time when Zesa was enforcing a punishing load shedding schedule due to cash flow problems.

As the Daily News investigation shows, it was a free for all — from the executive, the legislature and the judiciary down to party structures in remote places.

Multiple farms grabbed during the often-violent land reform have been getting electricity supplies for free, as ordinary Zimbabweans battling to survive the country’s struggling economy are switched off for owing paltry amounts.

Saviour Kasukuwere, who as Indigenisation and Economic Empowerment minister is leading President Robert Mugabe’s campaign to “spread wealth to the people”, raked up $100 602,22 in unpaid Zesa bills as at December 31, 2011.

Some of the defaulters locked out Zesa employees and set vicious dogs on them for trying to disconnect power. Legislators from across the political divide in the ruling coalition, judges, provincial governors, ministers and their deputies and permanent secretaries, make the list of defaulters.

A rundown of district bills as at December  31, 2011 tells a story. Among the biggest debtors in Marondera is Zanu PF MP Simbaneuta Mudarikwa, who owed over $12 000.

Aeneas Chigwedere, a historian and former cabinet minister whose headmanship is being challenged in the High Court by villagers in his Mashonaland East home area, owed Zesa over $8 000.

In Chinhoyi, Local Government minister Ignatius Chombo’s estranged wife, Marian, who is locked in a bitter divorce and property wrangle with her rich husband, is saddled with a staggering $175 085 Zesa debt.

The failure to pay runs across the entire gamut of government bureaucracy.

Henry Muchena, who retired as a commander in the air force to spearhead Mugabe’s re-election campaign, owed $31 800,56.

In Bulawayo East district, Vice President John Nkomo did not care to respond to Zesa enquiries about his $1 402,28 debt, documents in our possession show.

MDC MP for Nkulumane Tamsanqa Mahlangu, who was fired from a deputy ministerial post by Tsvangirai before losing the party youth wing chairmanship to Solomon Madzore, owed Zesa $2 248,34.

Zesa’s efforts to disconnect properties belonging to co-Home Affairs minister Kembo Mohadi and his wife Tambudzani Budagi, who is also Senator for Beitbridge, hit a brick wall after Zesa messengers failed to access the properties. The two cumulatively owed Zesa $12 538,57.

According to investigations, Kasukuwere’s empire is spread as far as Hwange, where again he has not been picking up his electricity tabs.

Kasukuwere’s UTC tour company was disconnected for a $4 857,44 debt. His other firm V/F Motors suffered similar fate after failing to pay $1 876,45.

Masvingo governor Titus Maluleke is one of the highest Zesa debtors in the province with a tab of $16 857,33.

It is in Manicaland where some of the biggest debtors are located. It starts right at the top.

Manicaland governor Chris Mushowe leads the pack with an astounding bill of $367 606,07.

Didymus Mutasa, the Minister of State in the President’s Office, who vociferously blames sanctions for the decline of State parastatals such as Zesa, owed the power utility a massive $179 590,31.

He paid $1 000 in January. But he doesn’t match Zanu PF Manicaland provincial heavyweight Enock Porusingazi, who owed Zesa a hefty $186 525,46.

Housing minister and MDC legislator for Dangamvura-Chikanga constituency, Giles Mutsekwa, is sitting on a $1 656,38 Zesa bill.

And this is just Zesa. Daily News