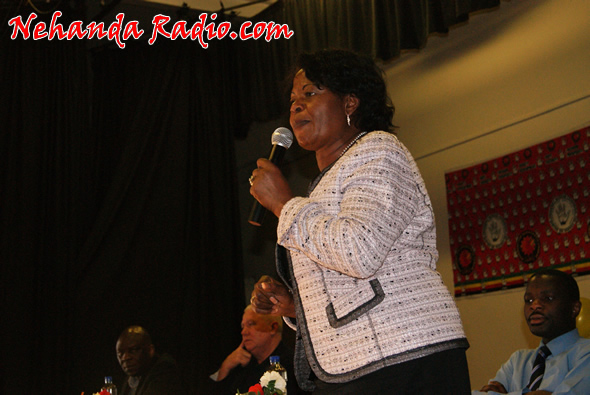 Addressing an MDC-T rally in Birmingham over the weekend, Makone said she met Green a few days back and told him many Zimbabweans were not in the UK by choice and given a change of circumstances would gladly go back home.

Apart from the cold weather, Makone said most Zimbabweans were former middle class workers back in Zimbabwe and enjoyed a very high standard of living. Given a change in the political environment they would gladly leave their ‘cleaning’ jobs.

There was drama during the meeting as a young lady emotionally recounted how she was detained at an immigration detention centre and attempts made UK Border Agency officials to deport her back to Zimbabwe via a Kenya Airways flight.

ICT Minister and MDC-T National Organising Secretary General Nelson Chamisa who was part of the visiting delegation immediately intervened and instructed party officials in the UK to look into the young woman’s case and help her.

At least 10 Zimbabweans have been deported from the UK since the resumption of deportations in April last year. A temporary moratorium on deportations was lifted after the conclusion of a long drawn legal battle between the UK Home Office and refugee rights groups. Nehanda Radio.com

Chamisa weaves his magic in the UK