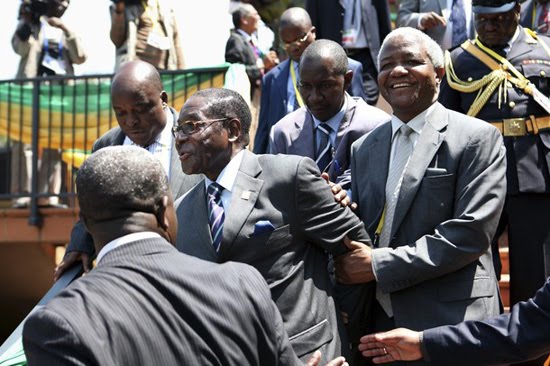 God pushes me forward. It is my innermost desire to live in repose but, more often than not, I find myself being thrown into the midst of tumults and revolutions. I am doing this because of my love for democracy.

My deep-seated belief is that democracy will only become the greatest form of government on earth if it is transformed from thin theory to thick practice.

For this reason, the time has come for all of us as citizens of the Republic of Zimbabwe to have sense enough and morality enough to stop Robert Mugabe from doing as he pleases with our country, our lives and those of our children, and our future. What Zimbabwe needs today, is ‘a group of men and women who will stand up for right and be opposed to wrong, wherever it is.’

Like Daniel Webster ‘The Great Expounder of the Constitution’, I find myself saying today: “Necessity compels me to speak true rather than pleasing things….I should indeed like to please you; but I prefer to save you, whatever be your attitude toward me”.

It is my utmost desire that, after all is said and done, we all will be able to apply our citizenship to the fullness of its meaning. We are tired, aren’t we, of being trampled with the iron feet of oppression. The time for democracy is now or never. Hear me for my cause dear reader.

“It is clear that as things stand at present, history will record Nelson Mandela as the first black statesman, as opposed to politician, to be produced by Africa”.

I feel it incumbent upon me, obviously as a bonafide citizen of the Republic of Zimbabwe, in this my humble contribution, to bring to the fore that it’s high time VaMugabe started thinking about the next generation i.e. nation first as opposed to his selfish interests.

My candid and honest opinion is that Mugabe still has the opportunity to democratise the politics of Zimbabwe. If he does this earlier the better so that history will at least remember him as an arrogant tyrant who made history by democratising an authoritarian state that he himself had created.

I am thinking, Cde President, about the many Zimbabweans, yes my brothers and sisters who are still smothering or is it suffocating in an airtight cage of poverty in a dual society. I am thinking about the fact: these brothers and sisters are still by and large housed in rat-infested, unendurable conditions in both rural and urban areas, still attending inadequate schools faced with improper educational facilities.

And I am saying, staying in office until you are an old, old man is morally wrong and not in the best interest of the country. Your overstaying in office has resultantly made you blind to what is right and this in turn has ruined the cause of many of us (the younger generation) who are innocent.

ZANU PF after all no longer represents the majority of the people of Zimbabwe but only a minority. Honestly, what can give life to such a dying horse? All I am saying is that this forgetful ruling class appears to have also forgotten that human beings are made in the image of God and that they are souls of infinite metaphysical value, the heirs of a legacy of dignity and worth.

For this reason, we cannot be content to see men hungry, to see men victimised with oppression, suppression, starvation and ill-health. We are many of us who share this feeling Cde President!

To my fellow citizens I would want to bring to your attention the fact that there are many of us who are writing history. There are also those who are making history and many more are experiencing history. What I don’t know, however, is how many historians we have in Zimbabwe today.

I don’t know how many of us would be able to write a history book, but we are certainly making history and we are experiencing history. And we will make it possible for the historians of the future to write a marvellous chapter about our struggle against tyranny.

In a nutshell, I would want to conclude with a very long quote from the late assassinated civil rights leader Dr. Martin Luther King, Jr who remains a source of inspiration to me. As American Ambassador Charles A. Ray put it the other day: Dr. King was “…truly gifted in his ability to communicate important ideas”.

And this is what Dr. King said:

“I say to you, this morning, that if you have never found something so dear and so precious to you that you will die for it, then you aren’t fit to live. You may be thirty-eight years old, as I happen to be, and one day, some great opportunity stands before you and calls upon you to stand up for some great principle, some great issue, some great cause.

“Don’t ever think that you’re by yourself. Go on to jail if necessary, but you never go alone. Take a stand for that which is right, and the world may misunderstand you, and criticise you. But you never go alone, for somewhere I read that one with God is a majority. And God has a way of transforming a minority into a majority.

“Walk with him this morning and believe in him and do what is right and He’ll be with you even until the consummation of the ages. Yes, I’ve seen the lightning flash. I’ve heard the thunder roll. I’ve felt sin breakers dashing, trying to conquer my soul, but I heard the voice of Jesus saying, still to fight on. He promised never to leave me alone, never to leave me alone. No, never alone. No, never alone”.

I am looking into the great beyond, not with uncertainty or dread, but with joyous hope and longing expectation that Mr. President will engage in deep searching of heart and earnest prayer as he considers stepping down for the common good. I put it to you dear Zimbabweans and I rest my case.