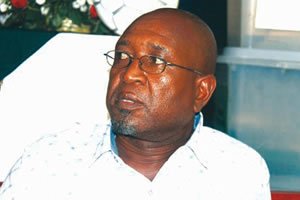 FORMER Young Warriors manager Eddie Chivero dropped a bombshell yesterday with sensational claims that Benedict Moyo allegedly bullied them in a failed bid to smuggle three players from his academy into the national Under-20 team.

The Zifa board member, who runs a football academy, BM Academy, denied the claims.

Chivero, who lost his Young Warriors’ post on Monday night, claims Moyo tried to push for the drafting of three players from his academy into the national Under-20 team ahead of the Cosafa Youth Championships in Botswana last year.

The players are Godfrey Tewende, Robson Daundi and Amos Tsuro.

Chivero said the Young Warriors’ coaching staff refused to bow to Moyo’s demands and believes this could have been a central issue in the decision to dump the technical team, en-masse, during the Zifa board meeting in Harare on Monday night.

Chivero revealed yesterday that he has kept the text message that he received from Moyo’s mobile phone advising him of the names of the players the Zifa board member wanted drafted into the Young Warriors squad for the Cosafa championships.

“The coach Taurai Mangwiro had a list of players that he wanted for the assignment in Botswana and, as team manager, it was my responsibility to contact them and advise them of the developments,” said Chivero.

“I then got a call from Benedict (Moyo) and as we discussed the squad, he questioned why there were so many players from Bantu Rovers in the squad as if that was the only team in the country.

“I advised him that the team from where the players came from didn’t really matter as the coach was only interested in getting the best players available in the country.

“Benedict told me that it was unfair for the Young Warriors’ technical team to try and pretend as if there were no players in Kwekwe who were good enough to play for the national Under-20 team.

“I asked him for the names of the players from Kwekwe that he wanted us to include in the squad so that I could discuss it with the coach and he gave me three names.

“Later, he sent me a text message with the three names of the players and they were Godfrey Tewende, Robson Daundi and Amos Tsuro.”

Chivero said he discussed the developments with Mangwiro because the instruction was a bit unusual and, after consultations, the technical team decided to stick with the players they wanted for camp.

“I had a long discussion with the coach over the issue but eventually we agreed that it would be unfair to pick those players on the instructions of a Zifa board member,” said Chivero.

Chivero believes their decision not to toe the line and draft the three players into the Young Warriors for the Botswana mission might have played a huge part in the decision to have his entire technical team swept away in the changes effected on Monday night.

“I wasn’t surprised really when I heard that we had been all been removed from the national Under-20 technical set-up on Monday night,” said Chivero.

“The issue of those three players was like an axe that was hanging over our heads.

“I now believe that for someone to survive long-term in the technical set-ups of the national teams, in the current climate, you need to be a friend, relative or business partner of some key people on the Zifa board.

“Or you simply have to be ready to do as you are told all the time and that includes the players that you can call for duty.

“I understand the board when it cracks the whip on some people who have issues that need to be resolved, asking them to stand aside, but I can’t understand some decisions when people who have no pending issues are just hung out in the open like that.

“If anyone can tell me what I did wrong, I will probably understand, and if anyone can also tell me what Sharif Mussa did wrong to warrant his removal from the senior national team, I will also get answers to a number of questions in my head right now.

“Before we went to Botswana, I personally wrote to Mimosa asking them to help the Young Warriors and they gave us US$24 740 for that trip to cover for the entire 25-member delegation, even when 15 members of our squad’s expenses were being taken care of by the organisers.

“Up to now, the players who went to Botswana are phoning me asking about their allowances and match fees and every time I have asked the Zifa officials, noone has explained what happened to the difference.

“Even if the money was diverted for other issues, we should have the courtesy of telling the sponsors what happened because, to me, that is what transparency is all about.”

Moyo dismissed Chivero’s claims and told The Herald he never tried to impose his three players into the Young Warriors’ squad for the Cosafa championships.

The Zifa board member said this was all part of a campaign to tarnish his image.

“It was Eddie (Chivero) who asked me about players in KweKwe who could be considered for the Young Warriors’ squad and I told him that I would consult the coaches who are here and would give them feedback,” said Moyo.

“It’s sad that he can turn around now and claim that I tried to force players into the team but I guess it’s a period where people are just trying to tarnish the images of others, so it’s something that I have to live with.

“I can’t understand why I could contact Chivero to get a player into the team when he was not the team coach but just the team manager.

“It’s the coach who picks the players into the team, unless there was something wrong with that technical team, and if anyone wanted to influence the process, then he would talk to the coach and not the team manager.

“But people are fascinated with blaming Benedict Moyo every time something happens and the same people who would cry foul saying we were not co-operating with them, if we didn’t engage them, somehow turn around and claim that we were trying to impose things when it suits them.

“How do you blame one person for changes made by an entire board to a technical team because even if I didn’t want those changes, the other board members would still have effected the changes?”

Moyo said he was in Egypt, in the countdown to the Young Warriors’ trip to Botswana, and therefore could not be accused of influencing the eventual traveling party.

Two years ago, there was an uproar when Madinda Ndlovu drafted in an unheralded Ziscosteel player, Munyaradzi Mungadzi, into the 2011 CHAN squad.