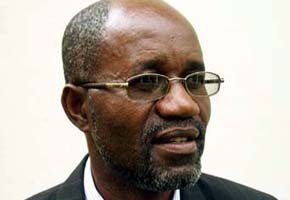 HARARE- An attempt by the Zanu PF controlled Herald newspaper to link an MDC-T MP to a rhino poaching case backfired miserably on Wednesday. Local Government Deputy Minister and MDC-T MP Sessel Zvidzai was named in a case which three men were arrested in possession of two rhino horns worth US$120 000 last week.

According to the Herald police recovered the horns in an Isuzu KB300 registered in Mr Zvidzai’s name at Road Port in Harare. The vehicle has since been impounded following the arrest of Zivanai Masvaire (27), a game scout at Eldorado Farm, Charles Dowe-rowe (37) and Shepherd Naite (37).

On Wednesday Zvidzai sent us this statement, while reacting to the story.

Statement by the Deputy Minister of Local Government Hon. Sessel Zvidzai on his alleged involvement in smuggling of rhino horns.

Today, I woke up to an astonishing lead story in The Herald alleging my involvement in a case in which three men were arrested for possessing rhino horns worth $120 000. The story alleges that the horns were recovered in an Isuzu KB 300 registered in my name.

The true facts of the matter are the car ceased to be mine on 22 March 2010 and the new owner is Mr Rodgers Gaka of Harare who runs a car-rental company, Rodygar Tours and Car Hire.

Since then, I have had nothing to do with the said vehicle and was surprised to see my name being linked to this vehicle probably because the change of ownership process is yet to be completed.

For the record, I am a devout Christian who has a strong position against criminal activities. As Deputy Minister of Local Government, species such as rhinos have assisted the CAMPFIRE projects whose proceeds have gone a long way in boosting the coffers of many local authorities.

It is in this spirit that I applaud the police for arresting these criminals and I hope that justice will be done not only to save the dwindling rhino population in Zimbabwe, but to send a clear message to criminal elements in our country.