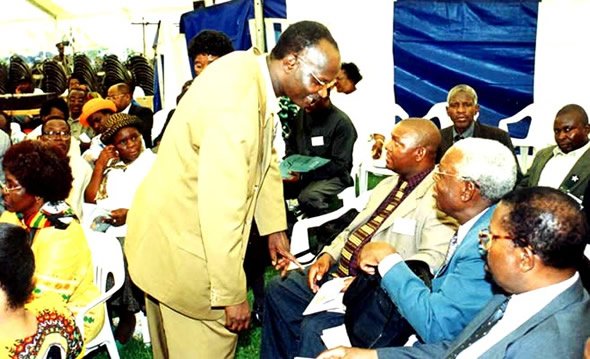 Former Information Minister and Zanu PF ‘strategist’ Jonathan Moyo has been accused of planting a false story in the state owned media that claimed Prime Minister Morgan Tsvangirai had bribed editors from three independent newspapers not to write stories about his supposed marriage to Locadia Karimatsenga Tembo.

Last Wednesday evening the Zimbabwe Broadcasting Corporation (ZBC) claimed the PM bribed editors from the Daily News, NewsDay and Zimbabwe Independent to write positive stories on his political and personal life. This would be done by “turning a blind eye on his transgressions while magnifying those of his critics.”

Daily News editor Stanley Gama responded with a stinging article that blamed Moyo for the article. “It is a shame that a few individuals at The Herald allow themselves to be used by some uncouth politician and gay gangster masquerading as a political strategist for Zanu PF,” Gama wrote in clear reference to Moyo.

“I know the story was manufactured by this gangster politician, whose mission is nothing except to get rid of President Robert Mugabe. He has tried it many times and later became desperate and even engaged Americans to help him but so far he has failed all because he is a fool,” Gama added.

Moyo has often faced accusations he is gay. The MDC-T legislator for Chimanimani West, Lynnette Karenyi, spent the entire Christmas period in remand prison after she was arrested by police in Mutare for allegedly branding President Robert Mugabe ‘a gay who sleeps around with Jonathan Moyo.’

Moyo was also sucked into a huge scandal involving the former Director General of the Zimbabwe Broadcasting Corporation (ZBC), Alum Mpofu. Moyo recruited Mpofu into the position but the ZBC boss left in a huff after it was alleged he was having an affair with Moyo. Moyo’s affair with Mpofu allegedly started in 1999 when Moyo was at the University of Witwatersrand in South Africa.

Several male journalists who worked for the state media during Moyo’s reign also alleged that they had to resist his sexual advances. Worse still Moyo crafted and pushed through the notorious Access to Information and Protection of Privacy Act (AIPPA) which was used to shut down several independent newspapers.

A 2004 incident in South Africa also exposed Moyo as a wife beater. Police were called to his hotel in Johannesburg, after his wife bolted from their room crying and frantically waving to hotel staff to call in the cops. Nehanda Radio.com

Is Amazon discriminating against Africans?

Video: Father vs Daughter – Who Is Your Favorite?