Mr Vegas fails to live up to his billing 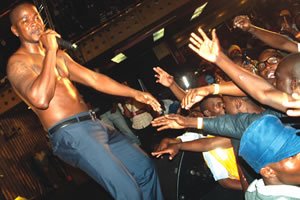 Dancehall fans who attended the much hyped Mr Vegas show were left a disappointed lot as the show failed to live up to its billing. The show, which was initially set for the Glamis arena, was held at the HICC.

Mr Vegas took to the stage around 1:30am after the crowd had endured hours of frustration. The crowd had suffered unending hours of listening to a couple of dreadlocked MCs and DJs playing dancehall tunes.

With his band in high spirits, the sweet sounding Mr Vegas put on a polished act as he came out with energy. He however, failed to connect with some of the fans as his playlist was dominated by conscious tracks, in contrast to the high tempo body shacking tunes that he is known for internationally.

He started the show with popular songs such as “Heads High” “Jack It Up”, and “Latest News”. Mr Vegas then sang a couple of songs by the legendary Bob Marley. The “Heads High” star played for close to two hours, closing his act around 3am.

The show opened with a performance by a local group Final Warning whose act was described by one fan as “painful to watch”. The absence of Winky D was strongly felt. There were performances by local acts that included Ricky Fire, Sniper, and Guspy Warrior.

It was Jiggaz of the “MaSister” fame who tried to step up to the plate with impressive vocals as he imitated several artists such as Mr Lexus, Capleton and Vybz Cartel. Jiggaz then brought onto the stage a 13-year-old “Spiderman” who chanted a couple of lines to the elation of the crowd.