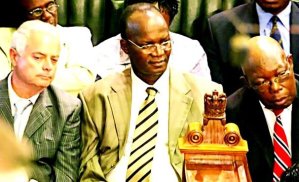 A few years ago, political turncoat Jonathan Moyo described President Robert Mugabe as a cornered rat who was left with no option except to quit.

Today, the flip-flopping Moyo is the one behaving like a cornered rat in the midst of stunning revelations that he sought the financial muscle of British billionaire Sir Richard Branson to help ease Mugabe out of power.

Moyo, who since he came into politics appears to have been busy plotting a Mugabe ouster — including the poorly organised and executed Tsholotsho declaration which the 87-year-old himself described as a coup attempt.

This week Moyo, whose lust for power is legendary, claims to have met Sir Branson at Oliver Tambo International Airport in South Africa and immediately started discussing a Mugabe ouster.

‘I warned ED about Jonathan Moyo but he did not…

Moyo claims that was the last time they met but Sir Branson, who is a businessman of repute, this week dismissed Moyo’s defensive antics and said actually they hosted the Zanu PF politburo member in the luxuries of Johannesburg plotting ways to remove Mugabe.

They spent days discussing the idea and probably only gave up when they realised that there was no positive response from Harare.

Sir Branson makes it clear that it was Moyo who approached him with the idea as the desperate former information minister sought ways to ensure that Mugabe was shown the exit door including using the financial muscle of the British tycoon.

Sir Branson should be commended for coming in the open about the plot where he clearly says that Moyo was central  to the scheme to oust Mugabe.

Sir Branson exposed him especially his stay in Johannesburg to plot Mugabe’s ouster. Typically, Moyo went on to describe Sir Branson, his former ally in the bid to remove Mugabe, as a racist.

But Moyo should answer a number of questions including but not limited to: Why did he approach Sir Branson who is not a diplomat and is not a politician? If it was not about money involved, what was Sir Branson’s interest in the plot?

Moyo says they met once at the airport in Johannesburg. Can he challenge Sir Branson’s facts that they hosted him in Johannesburg? What was he going to benefit in the event that Mugabe was ousted as per his wishes? How exactly did Moyo want to have Mugabe ousted?

Moyo is clearly hiding behind a finger and is behaving like a cornered rat. Daily News

South Africa pull out of friendly with Zimbabwe