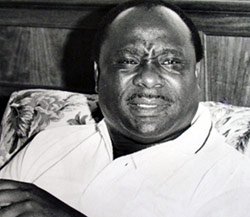 Former Defence Minister and ZANU PF founding member Enos Nkala has denied any involvement in the Gukurahundi Massacres. Nkala told SW Radio Africa’s Question Time programme that he was Finance Minister when soldiers from the notorious Fifth Brigade began a campaign that led to the slaughter of an estimated 20,000 innocent civilians in the Matabeleland and Midlands Provinces.

A defiant Nkala said he served as Finance Minister at independence in 1980 up to 1983 when the portfolio was consolidated into Finance, Economic Planning and Development under the late Dr. Bernard Chidzero. Nkala was then appointed National Supplies Minister up to 1985. After elections that year he served as Home Affairs and Defence Minister, in the two years leading to a unity accord between ZANU and ZAPU that ended the Gukurahundi Massacres.

Challenged on his role in the massacres as a cabinet minister Nkala said: “You are peddling lies which you cannot prove. You ask Robert Mugabe who formed Gukurahundi? Who deployed Gukurahundi in Matabeleland? Who gave them instructions to do what they did? It wasn’t me. Its people who are ill-informed who pick things from the press. You ask Mugabe, he owned Gukurahundi.”

‘Zec must be sued like hell’ says exiled former…

Nkala claimed he expressed his opposition to the massacres while he was still a cabinet minister and it was one of the reasons he doesn’t like Mugabe and the 87 year old ZANU PF leader also doesn’t like him. Nkala however also blamed the then opposition ZAPU for contributing to the conflict, claiming the abduction of white tourists in Victoria Falls by dissidents aligned to the party kicked things off.

“That was the reason for Gukurahundi and many other issues. The two main political parties (ZANU and ZAPU) we were both armed. Why should the blame be put entirely on the ZANU PF leadership, why not on the ZAPU leadership?”

Asked about a statement he made several years ago during a political rally, that he regretted being from the Ndebele tribe and wished he could wash this away, Nkala told SW Radio Africa: “That’s another lie. It was created by my political opponents who were fighting me and peddled that story to try and destroy me.”

“How could I, I am a proud Ndebele, whatever you think. I fought as a Ndebele, I entered politics as a Ndebele and I left as a Ndebele. So that’s nonsense, it’s rubbish, it belongs to the dustbin,” Nkala said.

Nkala also defended himself against the WillowGate Scandal, which cost him his job as a cabinet minister. The scandal saw several ministers abuse their concessions to buy cheap vehicles from the government-owned Willowvale Motor Industries and then sell them at a profit.

“It’s all nonsense. You buy something at a lower price; sell it at a higher price, what is the scandal there? It’s business.”

Reminded that they were abusing their privileges as ministers, Nkala said: “It was all foolish. It was because this weak man, so called Robert Mugabe wanted to weed some of us out. That was the reason, it was not about cars. It was blown out of proportion and if you believe it, continue to believe it if you like, it’s up to you.”

A recent article by writer Thembani Dube described Nkala and Jonathan Moyo as, “arguably the most notorious Ndebele leaders since the formation of the Ndebele nation in 1821 under King Mzilikazi.” We asked Nkala if he thought that was fair criticism. He gave us another defiant answer saying:

“Whether I am a good person or not, I wouldn’t care or give a damn about it. After all I have never heard about that Dube. He is just a useless creature, maybe a university lecturer or some funny gangster somewhere, he is entitled to his gangster thinking that’s all.”

Nkala refused to comment on the controversial book he is said to be writing in which he says he chronicles, “all that has happened in ZANU PF since its formation, including the Gukurahundi Massacres and the assassinations of several high profile politicians using car accidents.”

In the book he blames the death of liberation war heroes Josiah Tongogara and Herbert Chitepo and others on Robert Mugabe. All he said was that the book will be published when he dies, in the meantime he was, ‘doing a lot of research and authoring.”

In the Wikipedia entry for Enos Nkala he is accused of having had an affair with Mugabe’s late wife Sally. We asked him about this and he said: “Please don’t be silly. I haven’t seen that (article). I would like to sue that person. Please, some of these questions should not come out your mouth.”

Told it was our job as journalists to seek clarification on issues in the public domain he replied: “That’s why I am saying don’t be silly. If you read about leaders like (Winston) Churchill and others, there are a lot of untrue things written about them.” SW Radio Africa

To listen to the full interview with Enos Nkala on Question Time with Lance Guma: Click Here