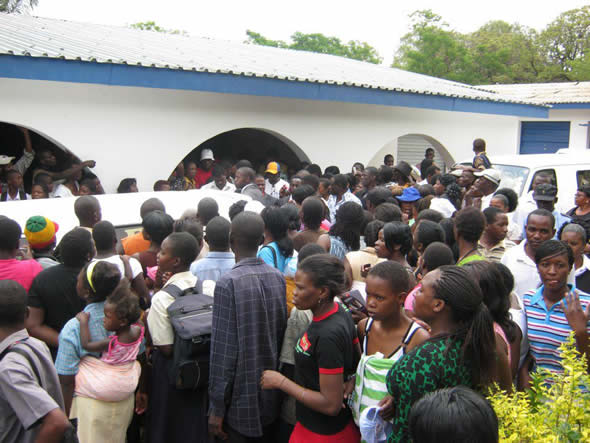 From Jonathan Mbiriyamveka in Kwekwe

Thousands of fans thronged Mbizo Stadium in Kwekwe on Monday to give Tongai Moyo a huge send off. The rare spectacle  brought the town to a standstill as fans, relatives, politicians and fellow musicians bade farewell to Dhewa. His songs were being played in pubs, commuter omnibuses and private cars as people mourned the Utakataka Express frontman.

Bob Nyabinde, who is also from Kwekwe and Jah Prayzah entertained mourners, while his band also took to the stage. Later, Dhewa’s body was taken to his rural home in Sesombe, Zhombe, for burial today at 11am. The cortege caused a traffic jam as fans blocked the road chanting “Dhewa makaoma”. The singer’s death brought together people from various walks of life who thronged Mbizo Stadium to bid him farewell.

Dino Mudondo, Energy Mutodi, First Farai and Leonard Zhakata are some of the musicians who attended yesterday’s proceedings. Deputy Prime Minister Thokozani Khupe hailed Dhewa for his resilience. She described his death as a big loss to the cancer foundation, which she represented. DPM Khupe, however, urged people to get tested early for cancer. She herself has cancer.

Media, Information and Publicity Minister Webster Shamu said Dhewa’s was a life well-lived and urged fans to support his son Peter. “Let’s pray for Dhewa and know that he will live through his son Peter. We hope that he will continue with his father’s legacy,” he said. In his condolence message, Minister Shamu, who is also the patron of the Zimbabwe Union of Musicians, said the nation was devastated by Dhewa’s death.

“He represented the breed of musicians that is influenced by their passion for the regaining of human dignity for the African,” he said.
Minister Shamu urged local authorities to appreciate the work done by artists. Our society should recognise the work and contribution of cultural heroes like Tongai Moyo.

“We therefore appeal to local authorities, the Ministry of Education, Sport, Arts and Culture and other stakeholders to consider artistes such as Tongai by naming streets and other social amenities after such artistes,” he said.