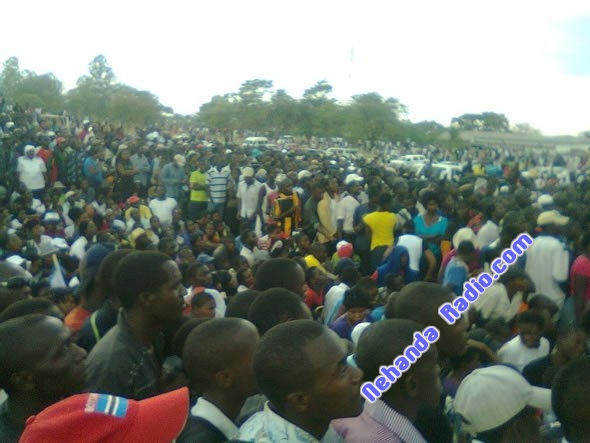 Over 15 000 people packed into Mbizo Stadium in Kwekwe to pay their last respects to music superstar Tongai Moyo, who died Saturday evening. The 43 year old, affectionately known as ‘Dhewa’, died at St Annes Hospital in Harare after a six year battle with non-Hodgkins Lymphoma, a cancer of the white blood cells.

Fellow musicians Sulumani Chimbetu, his best friend Somandla Ndebele, First Farai and Pastor Charles Charamba and Olivia Charamba, among others, attended a special church service that was held in Harare on Sunday. Later on business came to a standstill as Moyo’s body, accompanied by family members and friends, was driven from the funeral parlour to his home town of Kwekwe.

On Monday his legion of fans were given an opportunity to pay their last respects to the Utakataka Express frontman at the local Mbizo Stadium. It was there that 15 000 people got the chance to file past his casket and view his body, which was later driven to his rural home of Zhombe where SW Radio Africa understands he will be buried on Tuesday.

Meanwhile Prime Minister Morgan Tsvangirai on Monday issued a statement mourning the death of Moyo describing him as “an iconic musician who raised the country’s flag and helped lift the arts industry in the country.” Tsvangirai said Moyo had “kept the nation entertained through his thought-provoking lyrics and was one of the most popular musicians in the country.”

Tongai Moyo and Tsvangirai have over the years struck up a close bond. When Tsvangirai’s wife Susan died in a suspicious car accident, Moyo travelled all the way to Buhera for the burial. When Moyo’s first wife committed suicide last year Tsvangirai spent a considerable amount of his time at his house in Kwekwe. SW Radio Africa