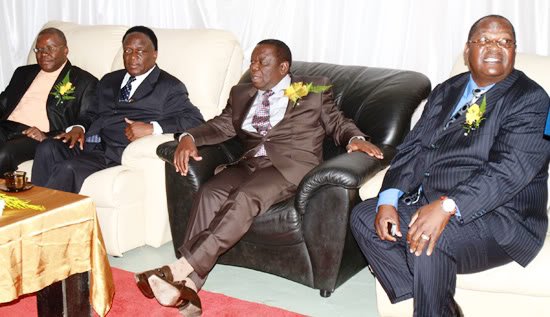 Defence Minister Emmerson Mnangagwa allegedly pleaded with Prime Minister Morgan Tsvangirai five years ago to include him in a future MDC government, a leaked United States embassy cable has revealed.

According to the secret cable dated June 2006, made public by the whistleblower website WikiLeaks last week, MDC-T secretary general Tendai Biti allegedly told a US embassy official Eric Schultz that Tsvangirai had been secretly discussing a power-sharing deal with Zanu PF officials.

Biti allegedly identified the Zanu PF officials as Mnangagwa and the late former army commander Solomon Mujuru. Mnangagwa could not be reached for comment yesterday. He said while Mnangagwa was willing to be Tsvangirai’s subordinate in the proposed government, Mujuru wanted the then popular opposition leader to be a junior partner.

“According to Biti, Mnangagwa was willing to subordinate himself to Tsvangirai in exchange for cabinet slots and protection guarantees for affiliated businesses,” reads part of the cable.

“Biti said Mujuru was only offering to take Tsvangirai in as a junior partner, which he said reflected the Mujuru faction’s continued primacy.” The cable also alleges that MDC leader Welshman Ncube had offered Biti the post of president in his faction before they brought in Arthur Mutambara.

“He said Ncube had offered him the presidency of the pro-senate faction, but that he had no regrets about remaining with Tsvangirai in spite of his faults,” Schultz wrote in the cable.

Biti is also quoted accusing Education, Sport and Culture minister David Coltart of being obsessed with race. Coltart had allegedly written an email to an official at the US embassy accusing the MDC-T faction of being behind the intra-party violence that led to the split of the MDC in 2005.