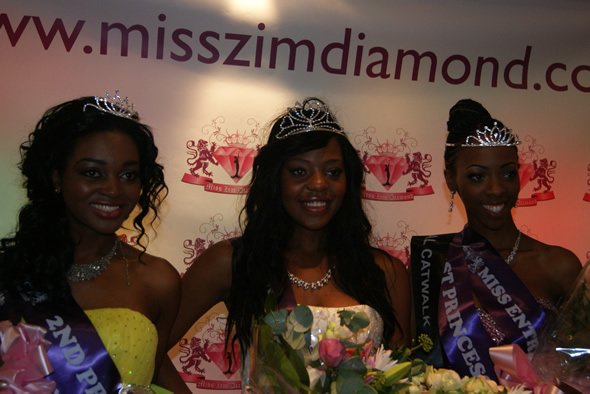 The Zimbabwe-born, Ireland-raised beauty won over the judges of the glittering show watched by an audience of 300, landing herself a grand prize of access to a career with a £30 000 a year salary in the hospitality industry, while other prizes took her total haul to an estimated £45 000.

Cheered on by her family and friends, the 20-year-old took top points across three rounds, modelling swimwear, eveningwear and a special business plan presentation category.

Organisers of the Miss Zim Diamond pageant had made a refreshing break from the mould by dropping the clichéd segment which asks models about their charitable intends at most shows. Instead, Miss Zim Diamond contestant had to present a business of logical income generation as well as community value.

With her beaming smile soon after her coronation by Miss Zim Diamond ambassador Pop star Shingai Shoniwa of the Noisettes, Pearl said: “I’m most ecstatic and thrilled at winning the first ever Miss Zim Diamond title. Though I have spent half of my life in the UK, I am Zimbabwean through and through am proud to have been chosen to be ambassador over the next year.

“My dream is to open schools in Zimbabwe that allow under-privileged kids to go to school and access the basic human right that is education,” added the pageant winner who is reading for a degree in Global Development and Politics at Leeds Metropolitan University.

Before declaring the winner and the two runners-up, the founder and organiser of the pageant, Glorianne Francis addressed the enthralled audience.

“Putting this show together required commitment. My honest appreciation goes to all our supporters. Miss Zim Diamond will endeavour to attract tourism and foreign investment in Zimbabwe by selecting admirable and talented delegates to portray a positive image of the Zimbabwean woman and the beauty of Zimbabwe as a country,” said an elated Glorianne.

As Miss Zim Diamond, Pearl will now take her platform nationally when she travels to Zimbabwe to compete for Miss Zimbabwe crown. Victory there would give her a shot at the Miss World title next year.

Push for Solomon Mujuru body to be exhumed