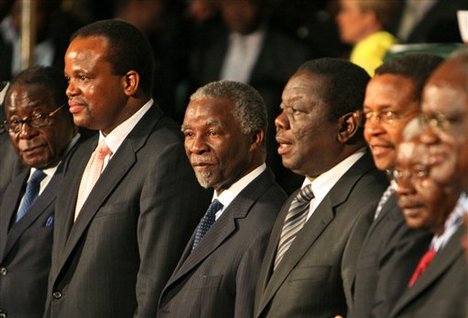 African leaders who have in the past stood by Mugabe and defended him from the West especially on the matter of sanctions have grown impatient with the situation in Zimbabwe and are keen to see the impasse resolved. This quest is laid bare through revelations in the explosive WikiLeaks cables released by the whistle blower website on Friday.

Kasukuwere seeks leave to evict war veterans who invaded his…

According to the whistle blower website, Algerian ambassador to Zimbabwe Lazahar Soualem met with the US ambassador Charles Ray in February last year and told him there was need for a graceful exit for the ailing 87-year-old leader because the problems in Zimbabwe could effectively affect the entire continent.

“It is important that a graceful exit be arranged for Zanu PF leader Mugabe, but it will be complicated by the inner circle of his advisors and by his own ego,” Soualem is quoted as having said. Soualem, who is said to have met with Ray soon after his arrival in the country, went on to say transformation within the party would be led by young party members who were power hungry.

He called upon Sadc and the African Union (AU) to intervene as Mugabe’s exit might prove difficult because everything had been centred around him since independence.

“Robert Mugabe has been in power for several decades and unlike other revolutionary counterparts in the region (ANC and Frelimo, for instance), he has developed a cult of personality and neglected institution building, leading to Zanu PF being the only independence movement to lose a post-independence election,” Soualem said.

Democratic Republic of Congo (DRC) ambassador Mawapanga Mwana Nanga, who has publicly defended Zanu PF, also criticised Mugabe saying he had handled the land reform poorly. He told Ray that his president (Kabila) had learnt how not to rule from Mobutu, his father (Laurent) and Mugabe and would therefore not respond to Mugabe’s insults.

Mwana Nanga, whom Ray said was candid and blunt in his criticism of Mugabe, said the 87-year-old leader was only using sanctions as an excuse not to develop the country. The DRC ambassador went on to accuse Zanu PF ministers who have amassed wealth during their time in office of not having the country’s interests at heart as no one was looking past the Mugabe era.

Kunle Adeyanju, Nigera ambassador to Zimbabwe also agreed with Algerian and DRC envoys saying Mugabe had badly managed the country. Adeyanju was quoted as having told Ray weeks before presenting his credentials to Harare that his president, Goodluck Jonathan, had said “Mugabe must go”.

Neighbouring South Africa and Africa’s biggest economy with a little sway on the country’s politics by virtue of its role as the facilitator of the (GPA) said Zanu PF’s poor management and lack of cohesion had hindered political progress in the country. South African ambassador to Zimbabwe Mlungisi Makalima said Zanu PF lacked vision and direction.

“While we must continue to strengthen the democratic opposition, it is crucial that we find ways to engage productively with Zanu PF, in particular to identify potential reform minded moderates within the party,” Makalima said. Another respected African leader and former Mozambican president, Joaquim Chissano, who starred as the best man at Mugabe’s wedding to Grace, likened the frail 87-year-old Mugabe to a “mad dog.”

“Chissano likened the situation to leaving an open door in a straw hut for a mad dog that, when kicked, would most likely run out, whereas if the door were closed, the dog would probably turn and bite,” the cable revealed. Mugabe is under pressure to resign from all quarters including from his own trusted Zanu PF officials. Daily News