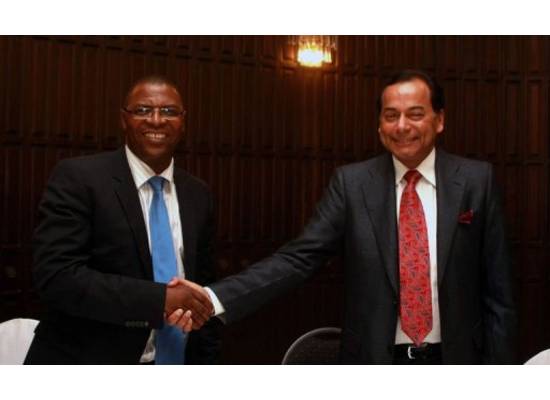 Controversy is brewing over the Zisco-Essar deal amid allegations that Industry and Commerce Minister Welshman Ncube pushed through the deal without proper due diligence and allowed Essar to unfairly own 80 percent of 45 billion tonnes of iron ore reserves (or 33 billion tonnes) from Buchwa Iron Mining Company, a subsidiary of Zisco.

With 45 billion tonnes of iron ore, BIMCO has the largest reserves of iron ore in the world. Concerns have however, been raised on why such resources are being sold for a song under cloudy conditions that are inconsistent with the strategic partnership agreement between the Government, Zisco and Essar to the prejudice of the national interest.

According to the partnership agreement seen by The Herald, Government owned 89 percent of Zisco Holdings from which it is set to offload 60 percent of its shares to Essar. As a result, Essar was supposed to get 53,40 percent of the stake in the New Zimsteel that is proposed to replace Zisco as the new joint venture.

Similarly, this should in turn enable Essar to acquire 53,40 percent of the New Zim Minerals earmarked to replace BIMCO, a Zisco subsidiary that owns the 45 billion tonnes of iron ore reserves which are in the eye of the new controversy along with three billion tonnes of limestone.

Given this position whose parameters are quite clear in the strategic partnership agreement, critics of the deal say Professor Ncube has not up to this point explained how and why Essar’s stake in Zisco has moved from 53,40 percent to 60 percent.

What is even more curious is why and how what should be Essar’s 53,40 percent shareholding in BIMCO to correspond with its stake in Zisco, has moved to 80 percent. This has left Government with only a 20 percent ownership of a strategic national resource for which Essar has not paid a cent up to now.

In addition to having this unexplained ownership structure which is grossly skewed in favour of Essar, contrary to the country’s indigenisation laws, it is alleged that Essar has also demanded and has been assured of control of Zimbabwe’s electricity and water supplies with unhindered access to the national railways.

Furthermore, industry sources say that Essar has sought and gotten far reaching tax concessions which include zero income tax for the first 10 years to be pegged at 10 percent for the second 10 years and at 15 percent for the 21st to the 25th years and at 20 percent thereafter for the domestic market with zero income tax for the export market for the first 20 years to be fixed at 20 percent thereafter.

On withholding tax, it is alleged that Essar has been granted zero rate on local steel sales, zero VAT on inputs or services, zero VAT or duties on all imports, zero customs duty on imports including personal effects for the first 10 years and zero duty on all consumables for the first 15 years.

In exchange for this deal, which is seen as an unprecedented giveaway. Essar shall pay or directly negotiate with lenders to settle Zisco’s foreign loans of some $240,500,00.00; $80million as capital to underwrite current projects; pay cash for 60 percent of Government’s 89 percent stake in Zisco and inject some investment and working capital all of it said to amount to no more than a billion dollars which Essar is seeking to raise by pre-selling one billion tonnes of iron ore from BIMCO’s 45 billion which it is set to control from this Wednesday if nothing is done to rectify the gross anomaly.

AAG president Supa Mandiwanzira, who said his organisation has been inundated with complaints about the deal from a cross section of the economy, described the deal as “rotten if true” adding that “Zimbabwe should not surrender the world’s largest iron ore reserves to settle a US$300 million debit of all things”.

By controlling 45 billion tonnes of iron ore out of which it will own 33 billion which represents 80 percent of the controversial stake in BIMCO which it plans to siphon from the country via a pipeline to Beira to feed its operations in Minnesota in the US and Agoma in Canada, Essar will become the largest iron ore supplier in the world by far.

Asked about the allegations that the Ministry of Industry and Commerce has given Essar control of Zimbabwe’s 45 billion tonnes of iron ore at BIMCO for a song to the detriment of the country’s indigenisation and empowerment the Minister of Youth, Indigenisation and Empowerment Saviour Kasukuwere said: “I have not seen anything yet on my desk on that matter and so I don’t know anything about it to be able to comment one way or the other”.

Efforts to get a comment from Prof Ncube throughout the weekend proved fruitless as his phone was unreachable or rang without being answered. The Herald