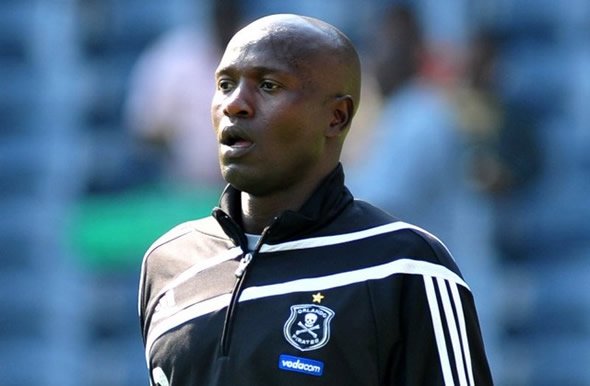 From Paul Mundandi in Zvishavane

ZVENYIKA MAKONESE marked his return to the domestic Premiership yesterday when he signed a deal to join Shabanie Mine – just two days after a shameless Facebook hoax led a top South African football website to report that he had died in a road accident.

The Zimbabwe international defender, who has captained the Warriors in a football career that started at Gaths Mine, has spent the last seven years in South Africa.

Makonese’s last club was Soweto giants Orlando Pirates, who won the Treble in South Africa last season, with the giant Zimbabwean defender not featuring much in their campaign.

Pirates offloaded Makonese when the former Warriors vice-captain’s contract ended on June 30 and the defender had set his sights on reviving his career at FC Platinum.

The Premiership leaders, however, settled for Highlanders captain Gilbert Banda in a three-man race for the central defensive role that featured Makonese and former CAPS United defender Charles Manjera.

Makonese, who had made up his mind to return home after suffering a media onslaught in South Africa that targeted his private life, decided to sign for his old club Shabanie Mine.

The deal comes just two days after KickOff, the leading South African football website, were sold a Facebook dummy and reported that Makonese had died in a car accident while driving back to Johannesburg.

KickOff were then forced to apologise yesterday to Makonese and his family after the player’s agent advised them that the Zimbabwe international was alive and well.

“The South Africa soccer fraternity was shocked yesterday following reports that the former Santos and Orlando Pirates player had passed away following a car accident in his homeland Zimbabwe.

“KickOff.com followed up and two separate sources confirmed the news, as did a hoard of other media houses.

“However, Makonese’s agent, Paul Mabye, tells KickOff.com it is all a terrible hoax spread by someone back in Zimbabwe who wants to tarnish the player’s reputation. KickOff.com would like to extend our sincerest apologies to Makonese, his family and friends who would have been affected by this news, and that the powers-that-be that, at the end of the day it was just a hoax.”

Makonese’s agent, Maybe, told KickOff: “I spoke to him 20 minutes ago and we had a good laugh about it. “I asked him, ‘Am I talking to a zombie?’

“Zvenyika is safe and sound back in Zimbabwe and we will discuss how this issue arose when he gets back.”

“We have signed Zvenyika and have actually sent our representative to the PSL to have him registered,” club chairman Webster Chitono said.

“He is our son and we need to see him revive his career. We need him to help us fight relegation. Our team has scored the least number of goals and we have conceded the highest number of goals in the Premiership. His addition will strengthen our team. We have not signed any other players except him.

“We have very good players as compared to some teams in the Premiership. We are welcoming Spencer Mudune back into the team from injury and it is my hope that, with the support we have in Zvishavane, we will avoid relegation since we are not Division One quality.”

Makonese said he was delighted to rejoin the club that gave a platform to make his Premiership debut under then coach Moses Chunga.

“I am urging all the supporters to come and give their maximum support to the Chinda Boys.

“We will make it and probably finish in the top eight. I need their support and I am very happy to be back home. I made my name with Shabanie before I went to South Africa to join Santos.

“I need to pay back the fans in Zvishavane and I am confident that despite missing action last season with champions Orlando Pirates I am going to prove to the fans that I still have what it takes.

“I am currently in Harare and I have processed everything.

“Just tell the nation that captain Zvee is back,” said the 33-year-old Makonese

Makonese is expected to be the central figure in the Shabanie Mine team, which lacked a natural leader in their pack. Shabanie Mine relieved coach Arnold Jani of his duties on Wednesday last week and brought back their former player Luke Masomere, to takes charge at the asbestos miners.

They also brought back former national team player Jani Milanzi into the fold. Milanzi made his mark with Eiffel Flats and Mhangura where he became a household name. He will be assisting Masomere together with Elvis “Chuchu” Muuya. Former secretary-general Chengetai Phiri also bounced back into his old position on Saturday.

Phiri quit the executive when he was re-assigned and Edmore Chandakasarira was appointed the club secretary-general. Chandakasarira, who was relatively new in the Shabanie fold, did not last long. He left the club without even submitting a resignation letter amid reports that he has found employment elsewhere.

Shabanie collected a big point in Mutare on Sunday when they drew 1-1 with Shooting Stars. They are expected to continue with their fight to stay in the top-flight when they play Zimbabwe Saints next weekend.

Dzvukamanja ready to unleash the ‘beast’ in him at Pirates