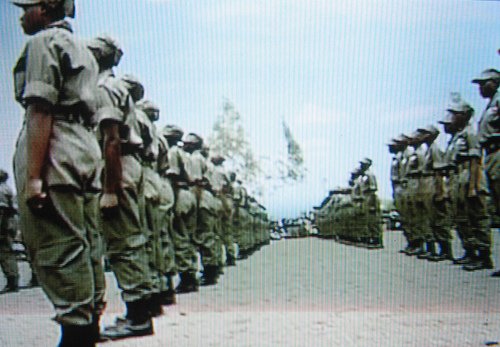 A coalition of civic organisations has claimed that more than 80 000 youth militia, war veterans and army commanders will be deployed across the country to ensure victory for President Robert Mugabe and Zanu PF in the elections expected after the constitution-making process.

In a damning report titled The Military Factor in Zimbabwe’s Political and Electoral Affairs launched in Johannesburg yesterday ahead of the Sadc special summit on Zimbabwe Saturday, Crisis in Zimbabwe Coalition said army commanders and senior Central Intelligence Officers would be deployed in each of the country’s 59 districts to coordinate a military campaign to ensure Mugabe’s continued rule.

The report is based on research conducted between September 2010 and March 2011. The research included interviews with various policy makers, serving and retired military officers, officials in the inclusive government, security sector experts, civic society and ordinary Zimbabweans.

“The strategy is to unleash enough violence and terror, worse than that seen in the bloody 2008 presidential run-off poll in which at least 200 of Morgan Tsvangirai’s supporters died and tens of thousands others were left homeless,” reads the report.

“The move is aimed at ensuring that a thoroughly cowed electorate will on voting day back Mugabe in enough numbers to save the veteran president from having to face another second round vote.”

Mugabe is now ruling the country through military structures and control in government and the party. The army has helped ensure Mugabe’s continued rule, mainly during elections in 2002 and 2008.

At the end of last year, Air Vice Marshal Henry Muchena quit the Air Force of Zimbabwe to work full-time for the Zanu PF commissariat department to revamp grassroots structures in preparation for the elections.

“Rugeje is reported to have already started the terror campaign on MDC supporters in the province where he has been blamed for several acts of violence and intimidation.

“In Mugabe’s Mashonaland West home province, Brigadier General David Sigauke is tipped to run the brutal campaign to keep the Zanu PF leader in power, while Brigadier-General Douglas Nyikayaramba will be in charge of Manicaland province.”

The report went on to allege that retired Brigadier Victor Rungani would be in charge of the campaign in Mashonaland East province, while Air Vice Marshal Abu Masuku would oversee the campaign in Matabeleland South province.

“Colonel Chris Sibanda and Air Commodore Michael Karakadzai will, respectively, run the campaign to neutralise opposition to Mugabe in the metropolitan provinces of Bulawayo and Harare that are seen as Tsvangirai’s strongholds,” read the report.

The report said top soldiers of the ranks of major-general, brigadier-general or air vice marshal, assisted by CIO agents would head provincial command centres that will direct the onslaught against the MDC.

According to Crisis in Zimbabwe Coalition, sources close to Zanu PF have said the party has agreed to demands made by the military that 25% of all legislative seats that Zanu PF would contest should be reserved for serving or retired military personnel. Crisis in Zimbabwe Coalition suspects that the recent recruitment of at least 5 000 soldiers is to boost numbers ahead of elections.

Efforts to get a comment from Defence minister Emmerson Mnangagwa were fruitless at the time of going to press yesterday, but state media recently claimed that the minister had tabled a report last Friday during the National Security Council meeting debunking claims that the army had deployed soldiers to campaign for Mugabe. The Zimbabwe Independent