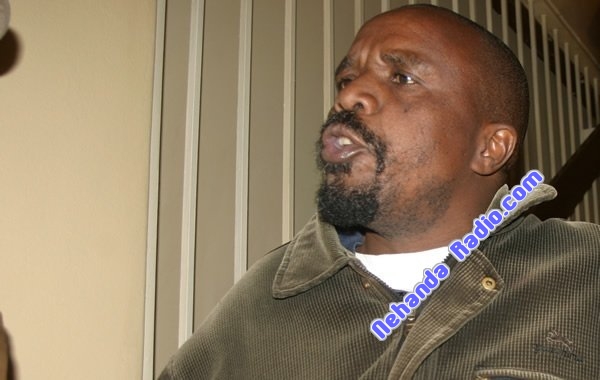 For 31 years Zanu PF has kept a tight grip on power by bludgeoning their opponents in Zimbabwe and killing thousands. On Thursday they exported this strategy to South Africa by trying to disrupt the launch of a Crisis in Zimbabwe Coalition report titled ‘The military factor in Zimbabwe’s political and electoral affairs.”

The Zanu PF chairperson for Johannesburg Ndaba Nyoni was actually filmed and pictured trying to disrupt the press conference. He was shouting and making noise, breaking hotel property including a lamp post in the process. Luckily the police and hotel security quickly intervened to restore order.

“We were able to proceed with our press conference and launch of our report” Dewa Mavhinga from the Crisis Coalition said. On Friday one of those present at the press conference Rodrick Magaisa formally filed a report of common assault against Nyoni who attacked him with a piece of glass.

“Is there a divinity that shapes our ends?” – The life and…

Chamisa says he warned Dewa Mavhinga against coming to…

Police at Johannesburg Central Police (John Vorster) have opened a file under case number 96/2011. Crisis Coalition reporters also have captured the incident on video and have evidence at hand to prove the assault.

“This clearly was an attempt by ZANU-PF to divert attention from its failings and from important SADC business of crafting a clear roadmap for Zimbabwe, but it has failed. Ndaba Nyoni was not invited to the Crisis in Zimbabwe Coalition press conference, but demanded entry and tried to cause confusion,” the coalition said.

“We rejected totally any attempts by Ndaba to smear civic groups or members of the MDC who attended the press conference by blaming them for ZANU-PF violence exported from Zimbabwe. We are aware that ZANU-PF will make further attempts to disrupt our ‘Zimbabwe Footprints of Abuse Photo Exhibition’ to be held tomorrow at the Hilton Hotel, Ballroom 1, from 10am.”

“We appeal to the South African Police to deal with these criminal elements who thrive on chaos, lawlessness and confusion. We are not deterred, our peaceful campaigns and our March and Rally on Saturday in Sandton will go ahead as planned,” the Crisis Coalition said.

The Coalition said it was indebted to members of the South African Police and Hotel Security who reacted swiftly to restore order and who quickly ejected the Zanu PF chairman from the hotel. For a copy of the report launched by Crisis in Zimbabwe Coalition  ‘The military factor in Zimbabwe’s political and electoral affairs.”: CLICK HERE

Sanctions on Zimbabwe did not fall from heaven

The values of the liberation struggle have been betrayed – CiZC

“Is there a divinity that shapes our ends?” – The life and times of Dewa Mavhinga

Chamisa says he warned Dewa Mavhinga against coming to Zimbabwe