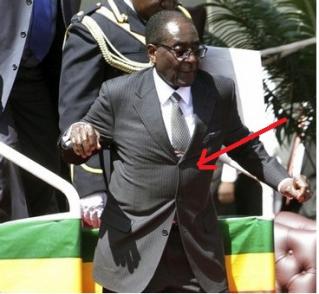 Zimbabwean dictator Robert Mugabe showed up at the National Sports Stadium for the 31st Independence Day celebrations on Monday wearing a visibly bulging bullet proof vest. As the picture shows, the 87 year old Zanu PF leader, is taking no chances with his regime have murdered thousands of people since independence.

Sources told Nehanda Radio that Mugabe hates wearing bullet proof vests and only does so when he visits open public spaces or places and when he visits European and American cities. The other rare occasion he wore the vest was in March 2009 after the car crash that killed Susan Tsvangirai, the wife of Prime Minister Morgan Tsvangirai.

On visiting a bed ridden Tsvangirai at the Avenues Clinic Mugabe’s Close Security Unity (CSU) advised him to wear the bullet proof vest during the visit. With swirling speculation that Mugabe had tried to kill Tsvangirai in the car crash and a huge crowd of people holding a Vigil outside the hospital the CSU team told Mugabe he would be entering ‘hostile’ territory.

Whenever Mugabe wears his bullet proof vest his suit bulges out and is straighter than normal, almost as if a cushion of air is sewn into its lining. Strangely on Monday it looked like he was wearing a much bigger and more padded bullet proof vest than normal suggesting its strength had been doubled.

Morgan Tsvangirai Independence Day message to the people of…

‘Mugabe and Zanu PF are worse than Smith and…

A ballistic vest, bulletproof vest or bullet-resistant vest is an item of personal armor that helps absorb the impact from firearm-fired projectiles and shrapnel from explosions, and is worn on the torso.

Soft vests are made from many layers of woven or laminated fibers and can be capable of protecting the wearer from small-caliber handgun and shotgun projectiles, and small fragments from explosives such as hand grenades.

Metal or ceramic plates can be used with a soft vest, providing additional protection from rifle rounds, and metallic components or tightly-woven fiber layers can give soft armor resistance to stab and slash attacks from knives and similar close-quarter weapons.

The video everyone is talking about

Morgan Tsvangirai Independence Day message to the people of Zimbabwe

‘Mugabe and Zanu PF are worse than Smith and Rhodesia’