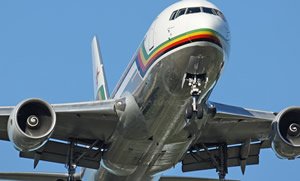 “Experience our Excellence” was Air Zimbabwe’s tagline at a time when the airliner delivered world-class services. Like other respected African carriers of the time such as Ethiopian Airways, ours was indeed a national pride.

Imagining that Air Zimbabwe would go into receivership one day, as it is just about to do, would have been a nightmare then. Three decades of state-engineered corporate malfeasance have brought us to where we are today. Even those who used to joke “Experience His Excellency” no longer see this as funny.

Hopefully, those know where proceeds from diamond sales are secretly banked will write the airline a cheque. Why a president of a not so rich African country should always gallivant across the world in chartered flights, when many leaders of very rich nations in other parts of the world use scheduled flights for both business and private travel, is just mind-boggling.

It is this kind of opulence perfected over thirty years that is now bringing Air Zimbabwe to its knees.

Morgan Tsvangirai has travelled widely especially since he became prime minister but there is not a day he commandeered an Air Zimbabwe aircraft. Has there ever been a time he missed appointments except on those rare occasions when Tobaiwa Mudede decided to use the Prime Minister’s passport as a pillow!

Peter Chikumba, who was fired from Air Namibia for corruption before seeking shelter at Air Zimbabwe, unashamedly told Zimbabweans that the president is a good customer who always pays for the services. If that is the case, then why is the airline failing to pay its staff to the extent of having its assets attached?

The twin evil of politicisation and militarisation of state-owned institutions by ZANU PF over the years, was perfect recipe for disaster which now characterises Air Zimbabwe’s crisis. It was through this kind of patronage and nepotism that the “legendary” Daniel Madzimbamuto ended up at the helm of a strategic and critical organisation such as PTC.

By the time of his death, the corporation had been bled to death through corruption and looting. Technocrats who were later enticed into the job to try and resuscitate the organisation did what they could before discovering that the mountain was just too high to climb.

Sydney Gata, the embattled “first” brother-in-law, though he seemingly possessed the right credentials for the job, theoretically that is, ended up overstaying his welcome owing to “royal” protection. By the time he left, new vocabulary had evolved within our society “magetsi auya – electricity is back”.

Though it would be un-African to celebrate anyone’s misery, in all honesty, had Gata’s marriage ended many years ago, ZESA would still be in a position to reliably supply power today.

At NRZ, Alvord Mabhena was probably the last professional general manager to run the organisation. I still remember the time when he won the prestigious award of general manager of the year before the essential service was militarised.

From the Air Force of Zimbabwe, came ex-combatant and ZANU PF functionary, Air Commodore Mike Karakadzai whose objective seemed to be nothing but to run this national asset to the ground. And he managed! This is not to say former soldiers cannot make it in corporate leadership or business. It all goes down to imposition of undeserving candidates by ZANU PF.

Another dismal failure was  retired Colonel Muvuti who caused havoc at GMB, piling up his pockets with every bit of crump left by Kumbirai Kangai at this nationally strategic entity. Assistant Commissioner Albert Mandizha was also allowed to dip his fingers in the jar before walking away with a golden handshake which remains unjustifiable even today.

Brigadier Douglas Nyikayaramba, who enjoys swinging between the army and the defunct Zimbabwe Electoral Commission, delivered the killer punch with impunity. Today GMB only exists in name.

ZBC/TV kissed goodbye to professionalism when Henry Muradzikwa was forced out of the job by not kowtowing party line. With buffoons like Happison Muchechetere who awarded themselves filthy packages when they could not even afford to buy basic broadcasting equipment to run the service, the corporation took a nose dive forcing viewers and listeners to flee in droves.

Such packages may have left managers of international news channels such as BBC and CNN wondering if it wasn’t time to post their resume’ to Harare.

Bright Matonga and the ZUPCO story are a public record. Some of our kids will never know what colour ZUPCO buses were. At a very young age, with a brand new qualification in mass communication and no relevant experience at all, it remains a mystery why this dismal performer was elevated to the top position at the public transport service.

What these cases show is that since it started deploying its apologists to run state-owned entities, ZANU PF perfectly laid the groundwork for destruction of the enterprises. Let us leave ZISCO fiasco for another day. Hence, the drama unfolding at Air Zimbabwe starting with employees attaching assets is just a tip of the ice-berg.

Such unprecedented implosion has been building up for decades while those connected deployed “kiya-kiya” strategies of survival. Now they are beginning to realise that “you can only eat what you kill”. To digress; Charamba’s comments on SADC troika were particularly amusing. “The Zimbabwe government has a voice that speaks when it is necessary. Like it has just done!”

In his cunningly crafted damage control article meant to be an apology to SADC and Zuma, he unambiguously advises readers not to believe the claptrap that comes out of state media in a clear reference to daily waffling by ZANU PF surrogates such as Rugare Gumbo and Jonathan Moyo.

Paradoxically, the gentleman also forgets that speaking for his master does not necessarily transform him into minister of information.

Moses Chamboko can be reached on [email protected]

New board at struggling Air Zimbabwe dismissed as window dressing