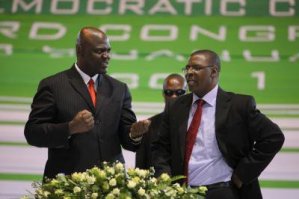 The MDC faction led by Welshman Ncube has denied claims by disgruntled former national chairman, Joubert Mudzumwe that his wife and children were assaulted by party drivers who were sent to collect two vehicles from his house in Runyararo West township on Friday.

Bulawayo Province MDC-N spokesman Edwin Ndlovu told Radio Vop that Mudzumwe was lying about his family being attacked by the drivers who collected the vehicles from his house.

“ Yes its true that we sent our drivers to Masvingo to collect the two vehicles from Mudzumwe because he is no longer with us. But he is lying that our drivers assaulted members of his family, ” Ndlovu told Radio Vop from Bulawayo.

Ndlovu said Mudzumwe was still bitter that Ncube took over the party leadership last week after Arthur Mutambara stepped down and did not seek re-election at the congress in Harare. He said Mudzumwe was allocated two vehicles to use in Masvingo when he was still national chairman of the party.

“ Why should he use our cars when he is no longer chairman of the party. He is just a bitter man who is trying to tarnish Ncube,s name and the new leadership, ” said Ndlovu.

Ndlovu told Radio Vop that Mudzumwe was first allocated a mazda 323 to use for official  party business. He was later given a pick-up after he complained that the first one needed to be sent for service. Mudzumwe on Friday told our correspondent in Masvingo that the drivers whom he described as thugs, beat up his wife and children before driving off with the two vehicles.

He claimed that the two vehicles were his personal property and would be approaching his lawyers to recover them.

“ He is free to go to his lawyers but he is wasting his time because he knows those cars belong to the party, ” said Ndlovu who accussed Mudzumwe of playing a tribal card. According to Ndlovu, the Masvingo delegates were disappointed by Mutambara because they expected the former University of Zimbabwe student leader to go along with their plans to derail the congress. Radio VOP

Why are we stuck in this pothole?