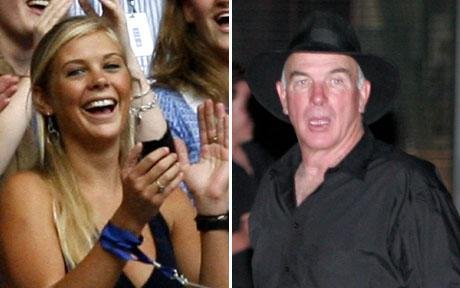 Controversial commercial farmer Charles Davy has threatened to sue a Zimbabwean website, for publishing a story accusing him of ‘aiding and abetting’ the ZANU PF regime. Davy is father to Chelsy, the ex-girlfriend of British Prince Harry.

The website in question, Zimdiaspora.com, published a story entitled ‘Name and shame: Charles Davy ZANU-PF sponsor, partner, hunter’. The article said “when most white landowners were scurrying for cover from marauding ZANU PF youths, one Charles Davy was enjoying himself at Matetsi Wildlife Enterprises. A hunter by day and a ZANU PF collaborator by night aptly describes the man.”

A six month undercover investigation by a reporter for the website reveals that Davy “has funded ZANU PF since 2002 and has partnered senior ZANU PF officials in illicit rhino horn trade. The officials are Webster Shamu and Emmerson Mnangagwa,” the report said. The story also accused Davy of funding Mnangagwa and Shamu’s parliamentary election campaigns in 2005.

Davy has responded to the article saying this is “exactly why I do not give interviews, they create stories and those stories fuel the fire of creating more absolute rubbish stories.” He claimed “there are over 400 farmers in Zimbabwe who have survived land invasions for various reasons, from geographical position, attitude of local communities, protection from bilateral investment certificates etc.”

Davy also claims that “prior to the land invasions in 2000 we had 25 white farmers in our district, 24 are still on their farms because our local district council/land committee decided that they were not going to disturb commercial farming in the district. They kicked one off his farm because he treated his labor and the local community badly.”

Contradicting Davy’s defence however are secret documents in the possession of Zimdiaspora.com, which expose how he “has not only funded terror to save his wildlife business but he has treated his workers worse than animals.” One of his former workers told the website that “at one time our pay was less than US 15 cents per month and many of us slept on bare floors without blankets. We couldn’t do anything, because he told us that President Mugabe knew him. We just suffered.”

Davy claims there are white farmers who openly support the opposition who are still on their farms “because of this decision by the local community not to interfere with the commercial farmers.” He claims his conservancy “just happens to be one of those farms in a district that is very arid, unsuitable for agriculture and where commercial farming is undisturbed.” He further claims to have lost 140,000 acres of prime agricultural land and forced to sell 10,000 cattle onto a depressed market.

The Zimdiaspora.com story however alleges that in July 2009 Davy met Mugabe in a meeting organised by Mnangagwa. Davy has also managed to meet President Rupiah Banda of Zambia and DRC President Joseph Kabila in the course of his business. The article says his company HHK Safaris ‘surprised many when they solely landed all government owned concessions,’ covering areas in the Midlands, Matetsi, Sabi, Kariba and some parts of Gonarezhou in the lowveld.

Davy is also implicated in the illegal smuggling of ivory to China and Vietnam using his Chinese links in Asia. Several senior members of the army based at the Defence House headquarters are said to be helping him.

“In the operation army helicopters disguised as army Red Cross ambulances or test flights land in Hwange National Park to pick ivory belonging to Charles Davy and partners,” the story claims.
The report also shows that commandos hired from 1 Commando Barracks stay at his HKK Safaris when poaching in the Hwange National Park.

“In many other cases they are given accommodation at Matetsi or Bubye,” the report says.
Davy has meanwhile already sent a letter to the Zimdiaspora.com website saying: “I will be sending an objection to this article to the editor and will take advice from my legal representative about taking the strongest possible action against them. I am done with journalists making money by writing rubbish about me.” SW Radio Africa

God cannot possibly be in the ZANU-PF camp

Mliswa blasts Ministers for disrespecting Mnangagwa and his deputy

‘Polls will be a huge challenge for your nation’- Lukashenko tells…